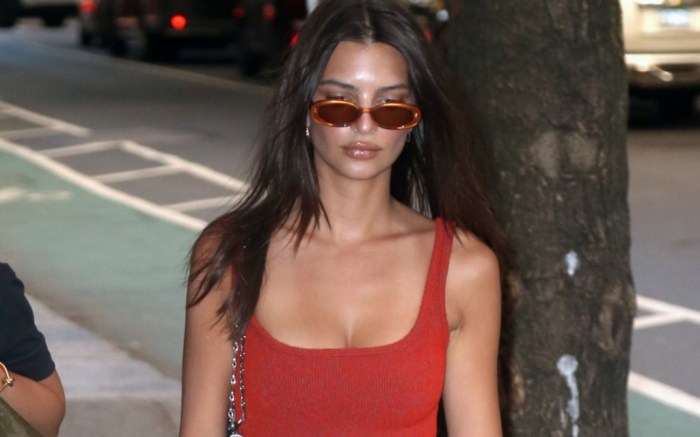 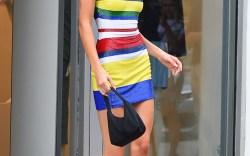 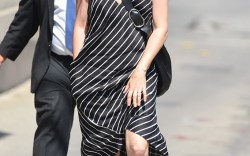 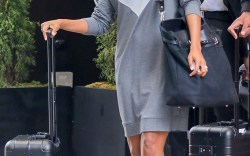 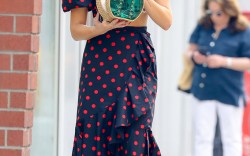 The model-actress was snapped out and about in New York on Thursday sporting a head-turning look consisting of a thigh-grazing skintight red tank dress teamed with an unexpected footwear choice: Yeezy Season 6 Desert Rat boots, which dropped in April.

The chunky Kanye West-designed boots, which come with mesh panels and suede overlays, are available in black or “Graphite,” but the 27-year-old “I Feel Pretty” actress chose the alternate sandy colorway. Moreover, when the sun began to set, the shoes’ reflective tongue trim detail became very apparent, lighting up the streets of the Big Apple.

Ratajowski further accessorized her ensemble with a $1,550 Paco Rabbane chainmail bag and her signature tiny-framed orange sunglasses — though it’s safe to say all eyes were on her buzzed-about shoes, which were originally priced at $295. They’re now available for $262 via Farfetch.com.

On the same day, EmRata took to Instagram to post a video in which she’s sporting a polka-dot-print bikini top from her own swimwear line, Inamorata Swim, while dancing along to Drake’s No. 1 viral hit song “In My Feelings.”

Lmaoooo. Wait for it.

See which celebs are loving dresses with sneakers.