Elton John’s Royal Wedding Look Is All About the Glasses 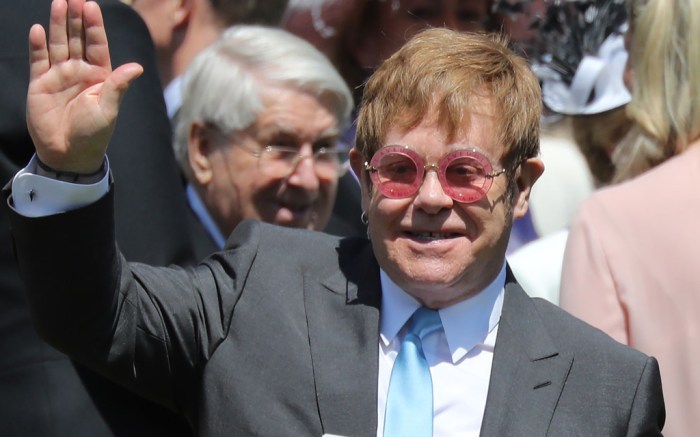 Elton John is known for his bold sense of style. But apart from a pair of funky glasses, John kept his outfit simple today as he attended Meghan Markle and Prince Harry’s wedding in Windsor, England.

John sported a dark gray suit with a light gray vest and a sky-blue tie. For footwear, he selected black dress shoes.

While the overall look was pared down, John’s glasses added a bold element to his ensemble. The performer’s oversized glasses were pink-tinted and featured little bugs at the corners of the lenses.

The “Candle in the Wind” singer — who was close with Princess Diana — performed for guests of the couple’s at the luncheon reception, hosted by Queen Elizabeth II at St. George’s Hall in Windsor Castle.

“Sir Elton performed for the newly married couple in recognition of the close connection he has with Prince Harry and his family,” the palace said in a statement.

Sir Elton John has performed at the lunchtime reception for the newlyweds, The Duke and Duchess of Sussex. #RoyalWedding Find out more here > https://t.co/4hbJn39Jq2

Prince Harry himself requested that John perform at the reception, according to the statement. John sang multiple songs for the 600 guests, including his 1971 hit, “Tiny Dancer,” which he dedicated to Markle.

At the 2011 wedding of Kate Middleton and Prince William, “Lights” singer Ellie Goulding was the entertainment and covered John’s “Your Song,” which the singer performed this afternoon.

Click through the gallery to see more wedding attendees, including George and Amal Clooney, David and Victoria Beckham and Oprah.