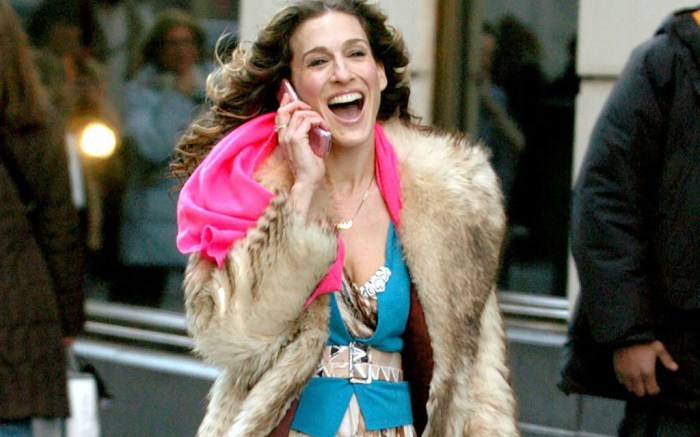 Carrie Bradshaw may have been a writer, fashionista and honorary New Yorker, but if there’s anything the “Sex and the City” columnist is most recognized for, it’s her passion for footwear. From mismatched heels to knee-high socks, Bradshaw tried them all throughout the series’ six seasons and its two movie sequels.

During a trip to Los Angeles, our fictional fashionista dons two differently colored shoes on her feet.

Carrie suffers a major fashion embarrassment as she trips over soaring stilettos to land flat on her face on the catwalk of a charity runway show.

🛍SHOP THE LOOK🛍 No, really. We are currently in possession of this ICONIC sapphire satin Dolce & Gabbana evening trench, identical to the one worn by Carrie when she face-plants on the runway. We're hoping that @SarahJessicaParker will buy it and resurrect this look come Halloween. Seriously SJP this is a really solid internet-breaking costume concept, just think about it. Anyhoo, the trench is available exclusively on our website (link in bio), s/o to @vintagefelix for finding this gem for us! ⚡️UPDATE ⚡️This item has sold, but we have more vintage pieces coming soon. Stay tuned children! (S4/EP2) #CarrieBradshaw #DolceandGabbana #FashionRoadkill #ShopEveryOutfit

Like so many Carrie outfits, this is the sartorial equivalent of bipolar disorder. No shade though, the knee socks are cute af (S4/EP1) #CarrieBradshaw #kneesocks

Carrie is famously robbed of her designer shoes by a man with serious sartorial knowledge. The pair in question: Manolo Blahnik’s red ankle-strap heels.

Carrie and a very pregnant Miranda horrifyingly witness her water break all over the former’s elegant pair of Christian Louboutin sandals with chiffon ruffles.

By popular demand the full outfit Carrie was wearing in the most problematic SATC episode "Boy, Girl, Boy, Girl…" (S3/ EP 4). What's more ill-advised: the white members only jacket, the flower pin, or Carrie's attitude towards sexual orientation in this episode? #CanWeTalkAboutCarriesBiPhobia #CarriesBasicSexuality

… and they get married in City Hall, with Carrie wearing the beautifully bejeweled shoes.

Another flower pin moment comes in the form of a gold-accented white number that Carrie contrasts with, yes, another pair of Christian Dior’s Extreme Dior cage sandals featuring silver-tone hardware and buckle closures.

🛍SOLD🛍 When paparazzi photos emerged of Sarah Jessica Parker filming the first Sex & the City movie in sky-high Christian Dior sandals, the world was never the same again. Ankle boots had been around for awhile at that point. But the high heel / ankle boot hybrid had not reached mainstream consciousness until this crucial tipping point. The "Extreme Dior” sandal was worn by Carrie throughout the first film in both black and brown. It is iconic AF, and we just happen to have a pair availble at mirandasolidarity.com, link in bio. Thx to @luxurygaragesale for snagging us these. And don't fret readers, we promise to revisit this glorious Carrie look in it's entirety ASAP 😘#CarrieBradshaw #ChristianDior #Shooties #SATCmovie #ShopEveryOutfit

En route to a New Year’s Eve party, Carrie opts for pajamas and a pair of white booties that rise inches in the snow (you can see her heel peeking out below).

Attention Sydney! 🇦🇺 We are thrilled to announce a very special screening of the first Sex and the City film at Golden Age cinema (@ourgoldenage) featuring exclusive audio commentary from us! Yes bitch, you can hear us discussing Carrie's iconic New Year's eve look, Lily's designer handbag addiction, and what Carrie really meant when she said that Mr. Big "rarely stays inside the lines." The screening is on Sunday January 7th at 5:30PM, tickets are $26. The the bar will serve cosmos for the occasion and 1/2 of this duo (@chelsea.fairless) will be lurking in the shadows somewhere. Click the link in our bio to buy tickets, we are also giving away three double passes to the first three people who comment "I CURSE THE DAY YOU WERE BORN" on this post. See you guys there, and don't worry, we will revisit this legendary outfit soon 😘 UPDATE: Due to popular demand, a second show has been added at 8:30!

Carrie discovers the “urban shoe myth” that is the Manolo Blahnik Campari Mary Jane pump during her visit to Vogue‘s fashion closet.

Tasked to ring the bell at the New York Stock Exchange, a frantic Carrie makes her way to downtown NYC in ’90s platform heels.

Ahead of her time, Carrie meets Big at the Central Park Boathouse wearing a PVC mule, which promptly goes swimming in the pond when the two hilariously fall in.

In rare form, Carrie dons sneakers (shocking!) — in the form of a dad shoe, no less.

One of Carrie’s most famed looks is this newsprint Christian Dior number, which she dresses up even further with sky-high Christian Louboutin heels.

In one of her sexcapades with Jack Berger (Ron Livingston), Carrie drunkenly slips on a pair of fluffy feather sandals — and falls asleep in them.

Carrie’s $485 silver Manolo Blahnik sandals disappear after she leaves them at the door of a friend’s party. She is promptly shoe-shamed and leaves the apartment wearing a drab pair of sneakers.

Carrie should’ve swapped her New Year’s Eve party boots (above, No. 11) with this snow-friendly pair.