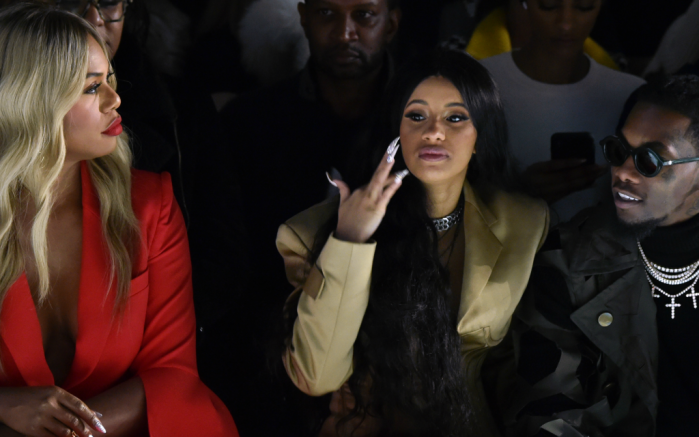 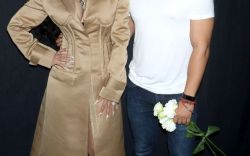 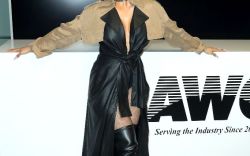 She’s unapologetically herself, and that’s why people love Cardi B. The unfiltered Bronx-born rapper has taken over the music world in the past year, teamed up with Steve Madden and Amazon, and is holding court in the front row at New York Fashion Week.

From taking in Jeremy Scott’s collaboration with Moon Boot to Alexander Wang’s final NYFW show, the “Bodak Yellow” hitmaker, known for her feminist attitude and hilariously out-there remarks (remember her interview with Giuliana Rancic on the Grammys red carpet that went viral?), has shown off a number of head-turning looks.

Yesterday, Cardi repped a champagne-colored coatdress from Prabal Gurung’s spring ’18 collection to view the designer’s latest line for next fall. Attending the show with fiancé and Migos rapper Offset, she completed her look with sheer ankle sock booties.

Meanwhile, the day before, the rapper made waves sitting next to Anna Wintour in the front row at Alexander Wang, launching “caption this” posts all over Instagram. But before mingling with the famous editor-in-chief, Cardi showed off her look in an Instagram video simply captioned “@alexanderwangny x @stevemadden.” In the clip, the Grammy-nominated 25-year-old does her own runway walk to the soundtrack of her hit song “Bartier Cardi” in a leather turban paired with a sleek tan and leather trench coat and black leather pointed over-the-knee Steve Madden boots.

Prior to Wang, Cardi made a glamorous statement in a bright green suit from Christian Siriano’s spring ’18 collection for his 10th anniversary show Saturday. A fur shawl by Duckie Confetti, white-rimmed frames and chunky black patent leather sandals pulled her outfit together for the occasion.

And in true Cardi fashion, the star posted a shot of her in the front row to social media, writing: “Now you wanna pistol whip me @csiriano.” Her appearance once again made the rounds on the internet as she was captured nodding her head in approval at every passing look.

With her bold looks and fierce personality, combined with the fact she’s the talk of the town, Cardi is a designer’s front-row dream. As she is an expert at showing off high-fashion creations, we hope to see more of the chart-topping rapper in the front row for the rest of New York Fashion Week.

For more of Cardi B in the front row, check out the gallery.