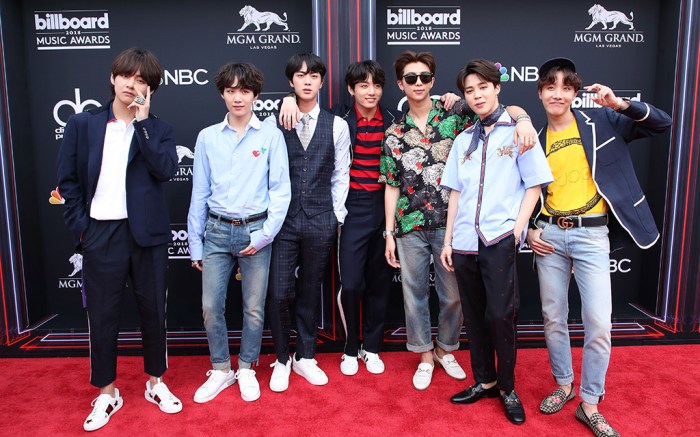 Did someone say Gucci gang? Korean pop group BTS just arrived on the 2018 Billboard Music Awards red carpet in Las Vegas and they are dressed in head-to-toe Gucci.

BTS’ shoe game was on point for the occasion, too. Wearing Gucci, more than half of the band went with the label’s classic white sneakers. Meanwhile, RM and Jimin opted for loafers. Suga may have won statement shoe of the night, wearing Gucci’s houndstooth, flower-adorned loafer.

This year’s red carpet look is a fun departure from their clean and classic black suits they wore last year for their Billboard Music Awards debut, which also happened to be their first time on a U.S. awards show red carpet.

The seven-member troupe was all smiles this afternoon as they were greeted by their fans, dubbed the BTS army.

Tonight, they are nominated for the Top Social Artist award, an honor they took home last year. Plus, BTS will be performing their new single “Fake Love” for the first time on television.

To check out all the red carpet arrivals at the Billboard Music Awards, click through the gallery.