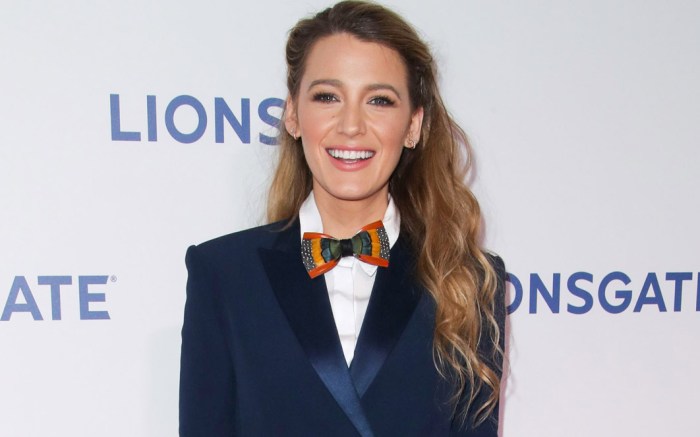 Now, here’s one celeb we’ve been waiting on to try out the controversial pantless trend — and, we have to say, she makes it look good.

Blake Lively commanded serious attention on Thursday when she stepped out at The Colosseum at Caesars Palace in Las Vegas for CinemaCon 2018 baring a whole lot of leg in an androgynous-chic tuxedo dress by Sonia Rykiel over an Aritzia blouse inspired by classic men’s shirting. The “All I See Is You” actress also delivered on the footwear front, wearing graphic-print Christian Louboutin pumps, which paired well with her eccentric Brackish bowtie.

Promoting her upcoming thriller, “A Simple Favor,” Lively appeared alongside co-star Anna Kendrick during the Lionsgate presentation. The movie, which is based on a novel of the same name, is directed by Paul Feig (who was also present at the event) and premieres on Sept. 14.

Lively also took to Instagram to share her headline-making look, sharing a photo composite of three poses side by side, writing,  “Who wore it better?” (All three of you did, Blake.) It’s not the first time she’s been spotted on an official engagement in Louboutins; the star is a major fan of the designer — having worn five different pairs from the brand in a single day.

Here, another closeup of the Louboutins:

Click through the gallery to see a roster of celebs who have also attempted the pantless trend.