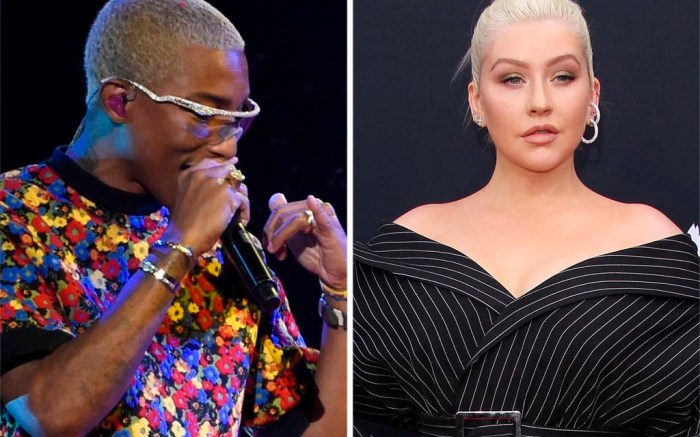 The 2018 Billboard Music Awards attracted a parade of stylish stars who are used to hitting high notes behind the mic, but on the red carpet, some observers thought their fashion fell flat.

Christina Augilera made a dramatic arrival in a pinstripe dress with a long train, but a fan was left underwhelmed by the grand entrance, tweeting, “I’m sad with Xtina choice is dress.”

Pharrell Williams is usually applauded for his bold fashion choices; however, some Twitter users were left perplexed. The hitmaker had on a floral-print T-shirt with red boxing-inspired short shorts and Timberland-style boots. “What’s going on with the outfit???” @shade_411 commented, adding laughing emojis. Another user compared him to a child who outgrew his clothes. “Why does Pharrell look approximately 12 years old in that outfit,” added @poehotdamneron.

@Pharrell what's going on with the outfit??? 😂🤣😂🤣😂 #BillboardMusicAwards2018 #pharrellwilliams #pharrell

Bruno Mars usually impresses with his flashy wardrobe, but a scaled-back early-’90s-inspired look got no love from @_ShariDarnell, who had no apologies for venting her opinion: “I don’t like this outfit Bruno has on. Dont @ me behind this bs neither.” Mars had on a chunky gold necklace with a button-down drawstring top with dark trousers and Virgil Abloh’s collaborative Nike sneaker.

Taylor Swift looked stunning in a leggy Versace number with Casadei heels. Even so, expectations were much higher for @tgapw, who tweeted: “Taylor Swift has all the money in the world but decided, well, what about that dress?”

Taylor Swift has all the money in the world but decided, well, what about that dress? #BillboardMusicAwards2018

Demi Lovato felt the call of the wild in a cheetah-print flowy dress that disappointed a fan. “My darling love u, but please stop, your dress is terrible,” said @CristiaannBS.