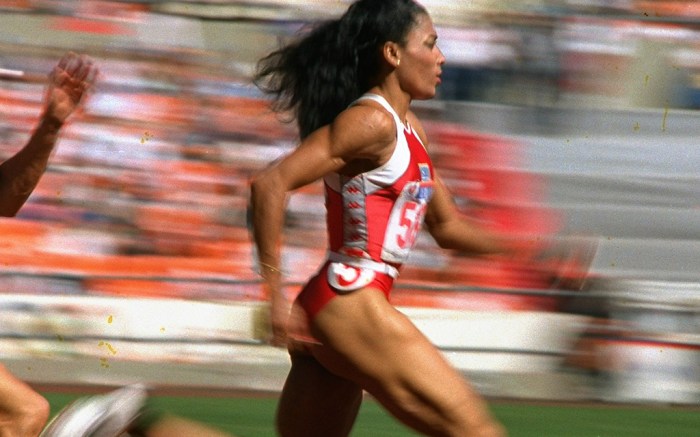 Beyoncé took us back to 1988 with her Halloween costume this year. The music superstar posted her nostalgic look early this morning dressed as late Olympian Florence Griffith Joyner, known as Flo Jo.

Wearing the iconic one-legged leotard in fluorescent purple with lighting bolts, Beyoncé channeled FloJo from the 1988 U.S. Olympic Track and Field Trials. It was there when Griffith Joyner was dubbed the fastest woman in the world as she set, and still holds, the 100-meter world record with a time of 10.49.

Aside from becoming known for her bold fashion choices, Griffith Joyner went on to win three gold medals that year and then retired. She died in 1998 from an epileptic seizure.

And Beyoncé’s interpretation was uncanny. She didn’t miss any details — including Flo Jo’s 371 race number and orange nails with tiger stripes. But she did offer a modern day twist. Like Griffith Joyner, Beyoncé completed her look with new Adidas shoes.

The “Lemonade” singer made it a couples costume, too. Husband Jay Z also went with a memorable moment from Olympic history, dressing as U.S. Olympic gold medalist Tommie Smith from the 1968 Summer Games in Mexico City. Smith became an iconic image in sports, along with teammate John Carlos, who both raised black-gloved fists during the medal ceremony in protest of inequality.

Click through the gallery to see more celebrity Halloween costumes.

Kylie Jenner Transforms Into a Life-Size Barbie Doll for Halloween