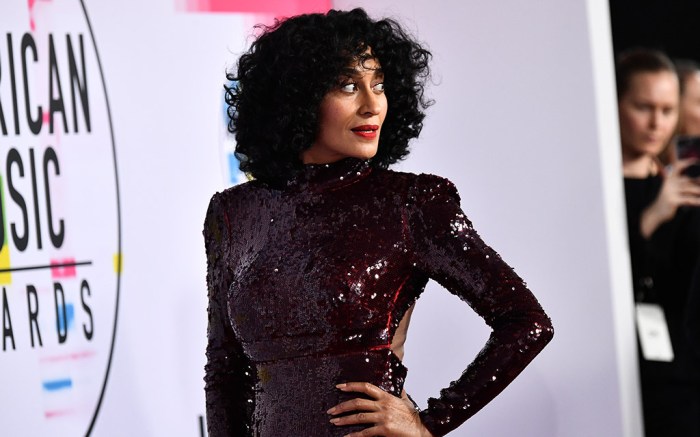 She’s the celebrity that everybody loves to love — with a fierce style to match. Tracee Ellis Ross’ playful aesthetic is always a show-stopper. Whether she’s in a custom Stella McCartney sequined gown or skin-tight Balmain bodysuit, she confidently steps out on the red carpet each time.

The actress is known to switch things up — sometimes at the same event, like her twelve different looks at the 2017 AMAs. But  there’s one shoe silhouette she undeniably favors: the classic pump.

To be specific, the “Black-ish” star loves to sport Christian Louboutin styles. Ross has opted for the designer on numerous occasions over the years.

Back in 2014, the star wore a chic look featuring a sequined pencil skirt and cream blouse at the Neighborhood Awards in Atlanta, Ga. She stuck with nude tones in her footwear by selecting a pair of neutral-colored Louboutins to complete the classy look.

The bubbly celebrity stepped out multiple times during 2017 in Christian Louboutin as well. In January, she made a statement in a sequin number at Harper’s Bazaar 150 Most Fashionable Woman Cocktail party in Los Angeles. For this affair, she chose a sleek black pump to pair with her shimmering dress which featured a black bow.

In April, she went with a bold, bright orange ensemble at a “Black-Ish” screening. Her patent Christian Louboutin pumps sealed the deal on monochrome dressing.

Click through the gallery to see more of her best red carpet style throughout the years.