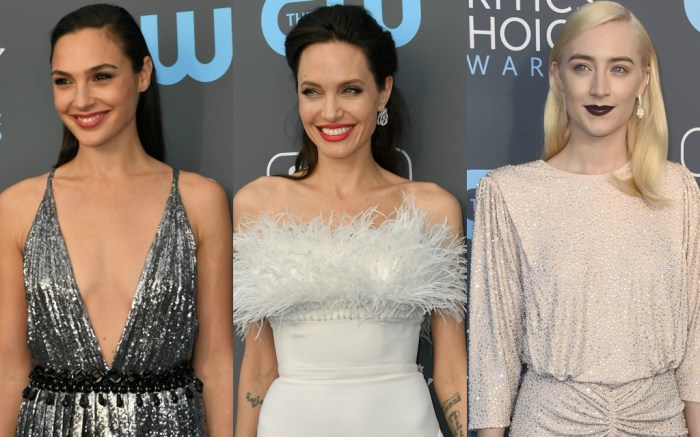 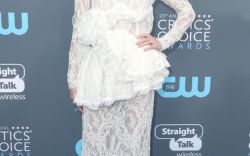 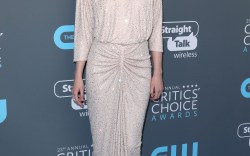 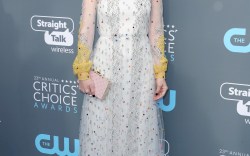 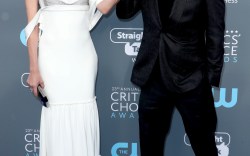 Will women continue to wear black after the 2018 Golden Globes black dress code in honor of the Time’s Up initiative to end sexual assault, harassment and inequality in the workplace? And how effective will it prove to be, if it does continue? At last night’s 23rd Annual Critics’ Choice Awards, the answers were unclear. While attendees like Laura Dern, Reese Witherspoon and Emilia Clarke continued to don black dresses (Dern in a chic Balmain jumpsuit), others opted out of dark frocks.

But there was still a lack of color on the red carpet. While there were plenty of attendees in metallics (like Gal Gadot in Prada and Gianvito Rossi and Mary J. Blige in Vivienne Westwood), there was also a curious trend of women in white gowns. From Angelina Jolie in a white Ralph & Russo strapless dress with a glamorous feather neckline and Kate Bosworth in a white lace gown from Brock Collection, to Saoirse Ronan’s beaded Michael Kors gown, Zoe Kazan’s chiffon Valentino frock and Diane Kruger in Vera Wang, the whiteout could be a coincidence — or another intentional statement.

Wearing white has long been a symbol of women’s suffrage, and many women (including Lady Gaga and Katy Perry) wore the color before, during and after the 2016 election. Some activists and stylists are attributing last night’s white theme as a statement of positivity, promise and the start of changing times for women. It’s also a statement that would echo the inspiring speech Oprah gave upon accepting the Cecil B. DeMille Lifetime Achievement Award at the Golden Globes on Sunday.

Whether the white trend was an intentional statement or just a coincidence, the effect was noticeable, elegant — and made for some of the best–dressed ensembles of the evening. Click through to see all of the evening’s standouts.