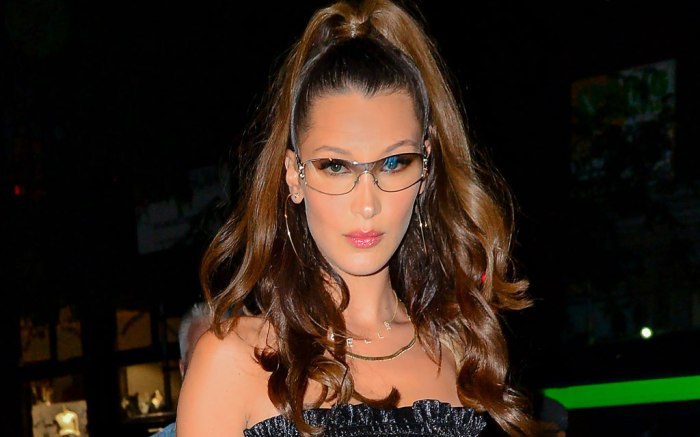 Bella Hadid is stepping into New York Fashion Week the only way she knows how — bold and radiant as ever.

Despite arriving at Cipriani late at night, the 21-year-old model appeared to be walking on sunshine in the pre-fall season’s shoe of the moment: yellow heels.

Pairing the statement shoes with a sultry ruffled minidress, the younger Hadid tried a contemporary spin on ’60s mod-chic, tying her hair into a top-head ponytail, as well as a mix of ’90s style through wraparound sunnies and a gold anklet delicately wrapped above her right foot. She completed the look with a tiny bucket-shaped bag and large hoop earrings.

Whether it’s Gen Z yellow or the earthier mustard hue, the brightly colored shoes have been spotted on many A-listers as of late, including Priyanka Chopra. The “Quantico” alum just yesterday stepped out to take her dog for a walk in yellow mules featuring a buckle detail and kitten heel — the hero piece of her outfit, which saw a coordinating semi-sheer blouse and light-wash distressed jeans.

Ariana Grande also recently donned the sunny-toned shoes in the form of over-the-knee boots before attending this year’s Video Music Awards rehearsal. The pop star, who was accompanied by fiancé Pete Davidson, paired the shoes with an oversized jacket and a Louis Vuitton purse.