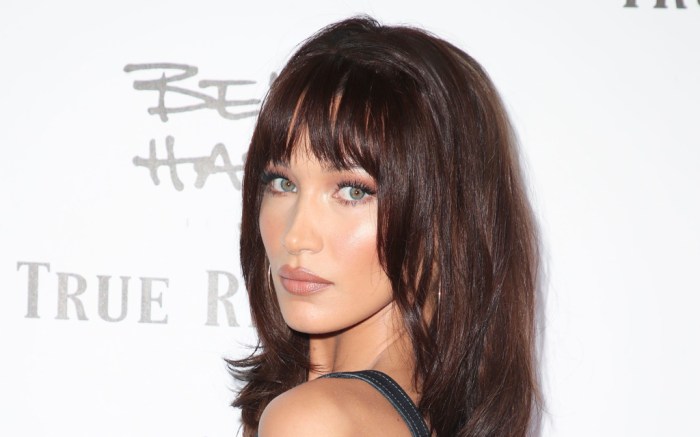 If anyone can make denim-on-denim work for a night out, it’s Bella Hadid.

The 22-year-old stepped out in a skintight ensemble that brought us back to the ’00s as she celebrated her True Religion campaign at Poppy in Los Angeles yesterday.

As she posed for photographers, Hadid sported a skin-baring tank top with matching capri pants, both in the same dark blue shade.

For footwear, the supermodel went with a pair of statement-making leopard-print wrap heels from Christian Louboutin. The stilettos featured a pointed toe covered in gold spikes. The Dior Beauty ambassador carried a matching leopard print Louboutin bag for a streamlined finish.

The catwalker added some edgy bangs to her brunette locks prior to the event. For makeup, she went with a simple look, choosing subdued blush tones that made her green eyes pop.

Aside from Hadid, attendees at the True Religion party included Jordyn Woods, Jasmine Tookes and Jasmine Sanders, who all came clad in the brand’s jeans.

Recently tapped as the face of True Religion, Hadid poses sultrily in the brand’s new campaign. In one sensual shot, the Nike ambassador appears topless in a pair of jeans as she holds a denim jacket across her chest.

Click through the gallery to see some of Bella Hadid’s best street-style looks.