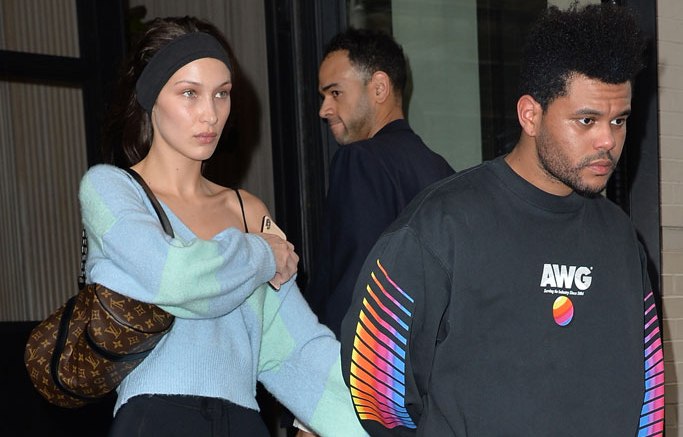 Bella Hadid and The Weeknd looked in sync as they stepped out in New York on Thursday in casual ensembles.

The 22-year-old model sported a cozy-looking baby blue sweater with a pair of bike shorts — a chic workout outfit that she wore to the gym later that day. The Nike ambassador chose all-black Air Max 270 sneakers, which she wore with a pair of crew socks also by the Swoosh.

Hadid accessorized with a Louis Vuitton monogram bag with a chain-link strap and bright orange hardware — a design from Virgil Abloh’s debut collection as the artistic director of menswear for the luxury brand.

Meanwhile, the 28-year-old singer (real name: Abel Tesfaye) stepped out in an Alexander Wang long-sleeved T-shirt with rainbow stripes on the sleeves, which he paired with baggy black pants. For footwear, the Puma ambassador selected retro-inspired black and white sneakers from the sportswear giant.

The on-off couple was seen on Nov. 1 after making headlines in their “Beetlejuice” Halloween looks at Heidi Klum’s annual fête.

Hadid channeled Lydia Deetz in a red custom creation by Sylvio Roubertto Kovacic. The bridal-inspired look featured layered tulle, sheer gloves and a giant veil — with the pièce de résistance being a bouquet of dying roses. For his part, The Weeknd dressed up in an elaborate Beetlejuice costume, which came complete with a spiky green wig and a heavy layer of face paint.

Click through the gallery to see more of Bella Hadid’s best street style.