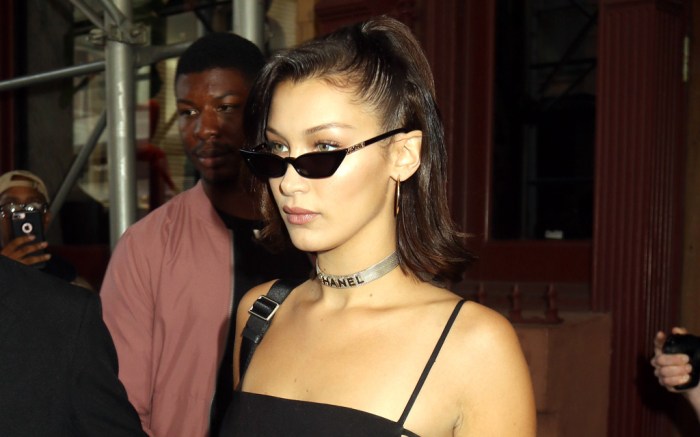 Bella Hadid had one of the biggest red carpet looks of the year, making a stylish statement at Cannes in a nearly naked Ralph & Russo Couture dress and glistening Rene Caovilla sandals. Her face was plastered all over fashion magazines — Footwear News included. And she walked the runway for some of the year’s hottest shows, including those by Victoria’s Secret, Versace and Alexander Wang.

But Hadid’s style on the streets made just as many headlines. The supermodel steps out in a variety of looks, and she’s always ahead of the curve when it comes to the latest styles.

Hadid embraced the white shoe trend this year. The model stepped out several times in Stuart Weitzman’s white boots — also favored by her sister, Gigi — and she sported stylish white sneakers, too.

A self-proclaimed sneakerhead, Hadid often swaps her catwalk heels for sneakers while out and about.

“I love to have a heels moment, but sneakers always end up looking cooler. And of course they are more comfortable,” she told FN in October.

A Nike ambassador, Hadid is loyal to the brand, and she frequently sports its sneakers. Kicks from Virgil Abloh’s Off-White x Nike collaboration — including his reconstructed Air Jordan, Footwear News’ 2017 Shoe 0f the Year — were among her favorites.

Of course, Hadid also stepped out in her fair share of heels this year. For a modern, racy look, the 21-year-old often pairs a crop top and jeans with pumps or strappy sandals.

When she does choose heels, favorite brands of hers include Off-White, Schutz and Stuart Weitzman. And despite her status as one of the top models, Hadid also embraces shoes from fast-fashion labels like Topshop and Mango.

Click through the gallery to see more of Hadid’s best looks of the year.