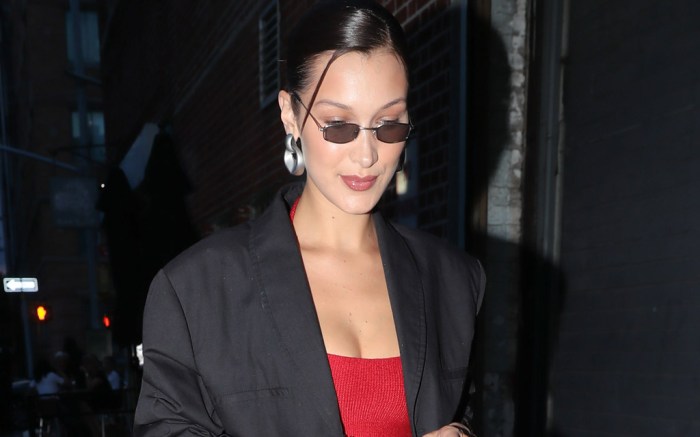 Summer is all about bold hues and lightweight fabrics, but when you’re in New York City, the color black still reigns supreme.

Enter Bella Hadid, who expertly incorporated all of the above into one of her most recent public appearances — including a pair of sandals that is set to become summer’s trendiest shoes, even when they’re paired with an ensemble that’s essentially transitional.

The model slipped into semi-sheer footwear for a dinner with friends in New York City’s West Village neighborhood. Her comfortable translucent mule slides featured a chunky, angular heel along with leather trim and a leather footbed, just the chic shoe for a sidewalk stroll.

She even added a pop of red with a beaded anklet wrapped around her left ankle — perfectly matching the sultry crop top under her oversize blazer. The outfit’s finishing touches were ultradark, high-waisted mom jeans cinched at the waist with a leopard-print belt as well as sculptural jewelry, a mini handbag and her signature ’90s-inspired sunglasses.

Hadid’s outing comes just days after she returned from Tokyo, where she and on-again-off-again boyfriend The Weeknd were rumored to be rekindling their romance. Neither party has confirmed their relationship since the latter ended his tryst with ex-girlfriend Selena Gomez, whose own ex, Justin Bieber, is now engaged to model Hailey Baldwin.