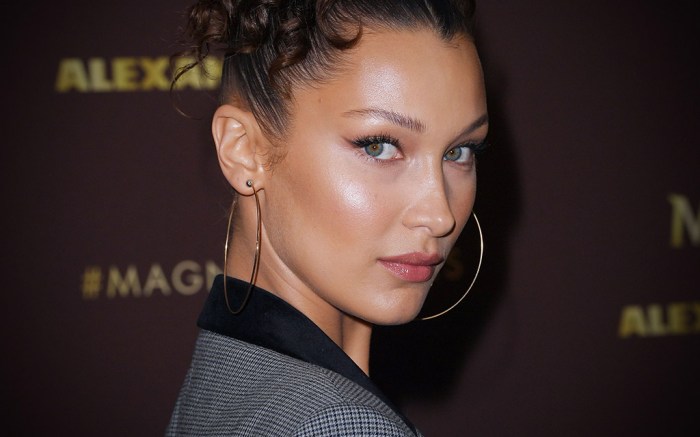 Bella Hadid is no stranger to the pantless trend.

The model has often been spotted in the most daring looks, from a super-short knit navy number to an ultralong-sleeve shirt that doubled as a dress. And last night at the Magnum x Alexander Wang VIP party during the 2018 Cannes Film Festival, Hadid stepped out with another smoking-hot ensemble that served up serious leg.

The 21-year-old beauty was a vision in a low-cut, figure-hugging gingham minidress under a blazer in the same pattern with a statement black neckline. She paired her pint-sized outfit with black pointed-toe d’Orsay slingback pumps after wearing the white iteration of the shoes at a press event.

Keeping it simple with accessories, Hadid flaunted minimalist rings and hooped earrings with her hair pulled up in a topknot, allowing corkscrew curls to frame her face.

She made her latest appearance with Wang close by, as the two promoted their collaboration for the ice cream brand’s “Take Pleasure Seriously” campaign.

That evening, paparazzi photographed Hadid getting up close and personal with ex-boyfriend The Weeknd, whose real name is Abel Tesfaye, whom she dated for two years before they split in November 2016. Neither Hadid nor Tesfaye has commented about their reunion.

Click through the gallery to see more celebrities who can’t get enough of the pantless trend.