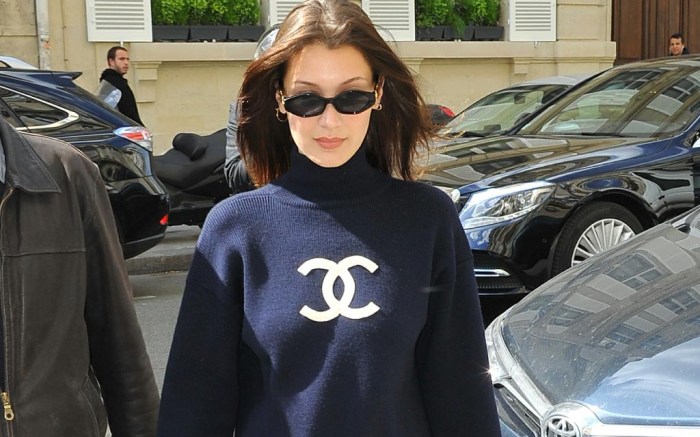 Bella Hadid and her sister Gigi are currently in Paris for fittings with Chanel, perhaps for the upcoming resort show. And while paying a visit to the brand’s store this morning, Bella embraced the no-pants trend in a super-short knit navy sweater-dress emblazoned with Chanel’s double-C logo.

After arriving in the City of Light this morning wearing all-black Nike Air Max 95 sneakers, the 22-year-old brunette supermodel slipped into knee-high monogrammed Fendi boots with a chunky block heel. Hadid polished her look off with sleek black frames, which has become a staple in her wardrobe.

The Nike brand ambassador is no stranger to rocking ’90s-inspired logo looks by Chanel and Fendi. Last month the model wore retro Chanel sneakers with a Tom Ford suit at the “Being Serena” premiere and a sultry white cropped Fendi “F” wrap-top at Coachella. Who could forget the black and brown “F” suit from the Italian luxury brand she sported during Paris Fashion Week?

Bella Hadid, who signed a deal with Nike in 2016, walked the runway for Fendi for the first time during the fashion house’s 90th anniversary show at the Trevi Fountain in Rome.The cover girl first hit the catwalk for Chanel in 2015 at the Metiers d’Art show, also held in Rome.