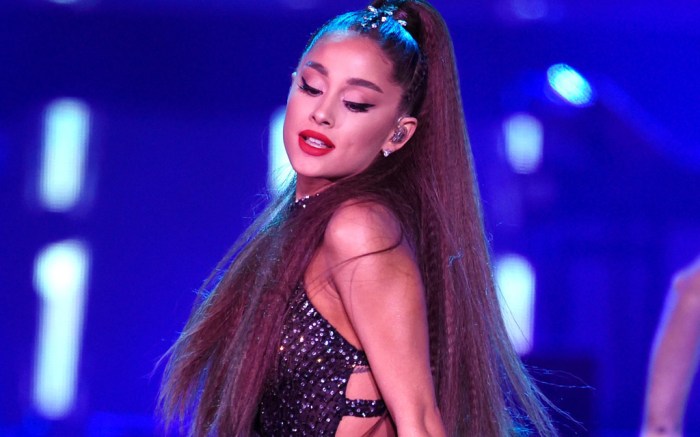 Ariana Grande’s much-awaited “thank u, next” video is here — and the ’00s film-inspired fashion is as good as the music.

The 25-year-old has been teasing the video for the last couple of weeks, which features several sequences based on classic 2000s teen movies.

The video begins with a “Mean Girls”-inspired montage of girls talking about the singer, who then appears with a “thank u, next” book — an exact replica of Regina George’s “Burn Book”— as she lounges in a childhood bedroom. Grande wears a tank top and teensy shorts with thigh-high socks as she lounges in bed, wearing an “A” necklace and holding a red pen.

The star is next pictured alongside a group dressed as the Plastics while clad in a pink cardigan, tank top, plaid skirt and pink pumps.

The limit does not exist.

Wearing a tracksuit, Kris Jenner makes a surprise appearance as Grande’s mom, snapping photos from the audience as the girls perform onstage.

The “Sweetener” songstress also pays homage to the film “Bring It On” while wearing a red and white cheerleading uniform with the words “TUN” emblazoned across the chest and white sneakers.

• It’s her last cheerleading practice how would you guys feel? • big red has no feelings ♥️ and for the record, when that little one does fall out, happy to babysit anytime @colleen 🤗

Also mimicked is the movie “13 Going on 30.” For this sequence, Grande sports a red floral top, skinny jeans and soaring Jimmy Choo sandals as she poses alongside a doll house.

Rounding out the video is a sequence inspired by “Legally Blonde.” In this bit, Grande walks a chihuahua while clad in an all-pink outfit, towering pumps included.

See the full video below.

Click through the gallery to see Ariana Grande’s style evolution.

Ariana Grande Gets Caught In the Rain Wearing Retro Reeboks