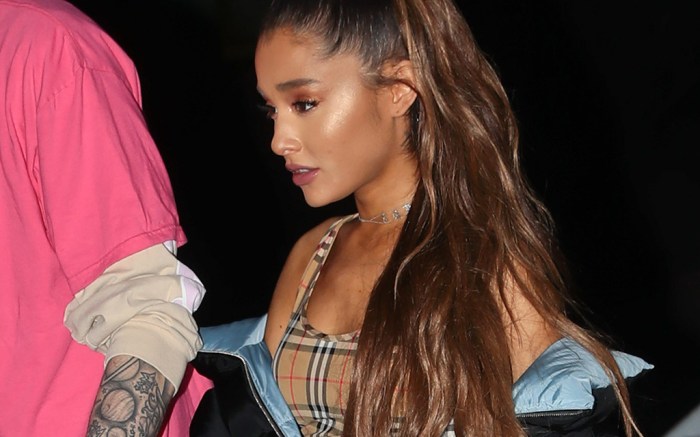 While the New York City weather has yet to dip below 60, Ariana Grande is already debuting a winter-ready look in the streets.

The songstress stepped out for a date with fiancé Pete Davidson while dressed in an oversized black parka with blue lining, which she left open to reveal a plaid sports bra from Burberry.

The former Nickelodeon star sported her signature high ponytail, wearing a black scrunchie that matched the lining of her puffer jacket.

For footwear, the “God Is a Woman” singer selected Christian Louboutin Dovi Dora booties with a 4-inch heel. The stylish boots featured a knit-upper with spiked-leather details at the heel and a pointed toe. The edgy, Italian-made shoes retail for nearly $1,200.

Meanwhile, Davidson kept it casual in a pink graphic T-shirt with a tan long-sleeved shirt underneath and black sweatpants. The “Saturday Night Live” comedian chose suedelike Puma sneakers in a tan colorway to complete his ensemble.

A Reebok ambassador, Grande has been keeping a low profile in recent weeks as she mourns the loss of ex-boyfriend Mac Miller, who passed away of a drug overdose Sept. 7. The pop star was originally slated to attend Monday night’s Emmy Awards but opted to stay home in New York instead.

Click through the gallery to see how Ariana Grande’s style has evolved over the years.

Ariana Grande Gets Caught In the Rain Wearing Retro Reeboks