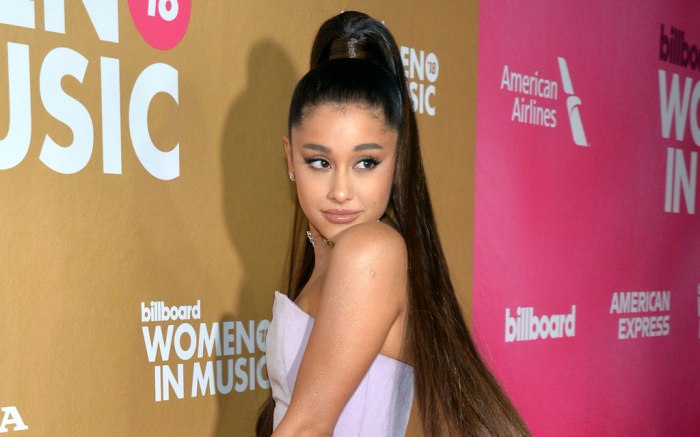 The pop-star performed her latest single, “Imagine,” on “The Tonight Show Starring Jimmy Fallon” yesterday while clad in a red snowflake-embroidered sweater and boots.

The sweater was a cheeky Talbots Christmas design adorned with white snowflakes, which Grande wore oversized and without pants. While the 25-year-old has many thigh-highs from a range of brands in her wardrobe, she opted for Sergio Rossi’s Matrix boots. The stretchy style feature a 4-inch heel with a goat suede lining. The Italian-made boots retail for a cool $1,395.

The “Victorious” actress wore her long brunette strands in her usual high ponytail, opting for a glamorous makeup look with sparkly eye shadow and long lashes.

Grande’s sweater was part of the show’s cold open, as she came out twinning in the holiday sweater alongside Fallon, Horatio Sanz, Chris Kattan and Tracy Morgan as the group performed “I Wish It Was Christmas Today.” Fallon, Sanz and Kattan initially performed the gag tune on “Saturday Night Live.”

The “thank u, next” singer then wowed the live studio audience with her first-ever live rendition of “Imagine,” her single that dropped last week. The song includes a whistling section — it’s the first of Grande’s songs to do so since her 2013 hit “The Way,” which featured Mac Miller — and the crowd went wild when she began to whistle.

See the full performance below:

Click through the gallery to see Ariana Grande’s style evolution over the years.