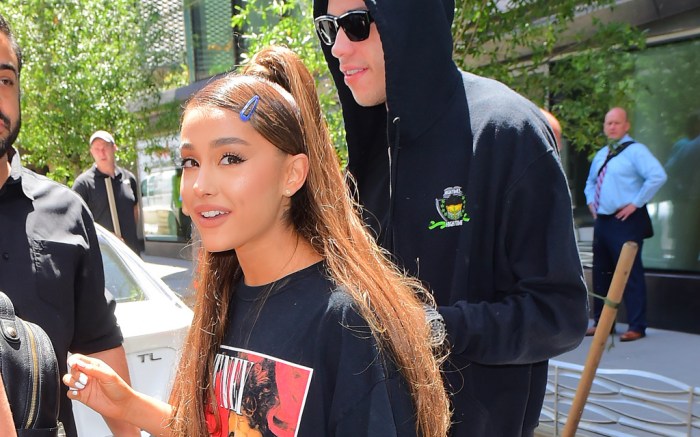 By now, if you’re an Ariana Grande fan, you know that going pantless is her thing. The “No Tears Left to Cry” hitmaker rarely reaches for pants, most often stepping out in oversized tees, hoodies or jackets paired with over-the-knee boots.

Prior to heading to a photoshoot on Tuesday, Grande hit the streets of NYC for a Starbucks run wearing a charcoal gray zip-up hoodie as a minidress with sandy Yeezy Season 5 Tubular thigh-high boots, a style she’s rocked on multiple other occasions.

The 25-year-old songstress donned the same beige suede over-the-knee booties featuring a pointy-toed silhouette in June with fiancé Pete Davidson, as well as in an Instagram snapshot posted in December.

Meanwhile, Grande, who wore her tresses up in double buns secured by two ’90s-inspired scrunchies, accessorized her street style ensemble with a black fanny pack around her waist.

The iconic retro collab shoe, which also comes in black, dropped for spring 2018 and features a white leather upper, an all-over print consisting of NBA and Supreme logos and “Supreme” embroidered ankle straps. The collection dropped in March.

Check out Ariana Grande’s style evolution through the years.