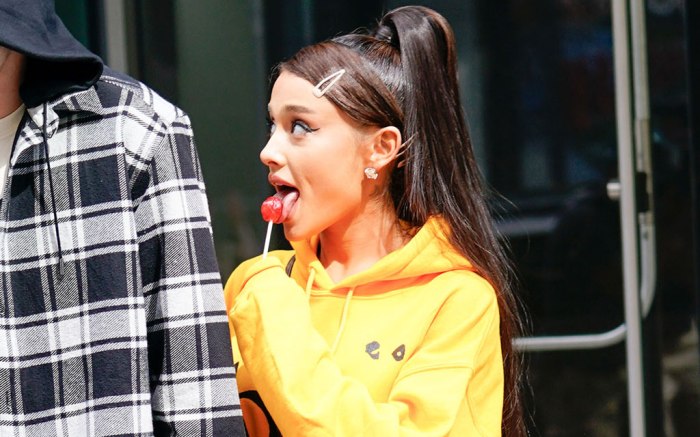 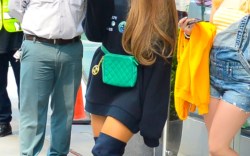 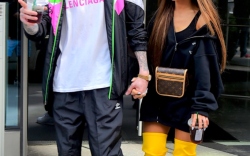 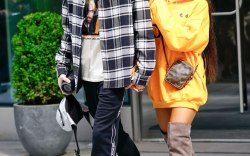 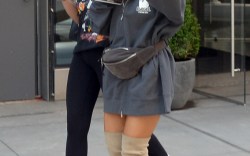 When it comes to fashion, Ariana Grande has a favorite look: an oversized T-shirt, sweatshirt or jacket and thigh-high boots.

Grande’s most memorable take on the look — and the one that inspired both memes and Halloween costumes galore — came this June while she was out with then-fiancé Pete Davidson. The pop star wore an oversized Cloney Benji hoodie in mustard yellow with a pair of soaring Giuseppe Zanotti boots. She accessorized with a mini monogrammed Louis Vuitton bag and sucked on a red lollipop.

The 25-year-old has thigh-highs from many brands in her wardrobe, but one of her favorites is from Yeezy. In July, the musician was snapped in New York with icy purple locks with an oversized white denim jacket by Maison Margiela, finishing off her ensemble with the Yeezy Season 5 Tubular boots in taupe.

Grande also likes Stuart Weitzman’s Highland boots. The Nickelodeon alumna paired a gray version of the Highland style with an oversized Reebok windbreaker (she’s an ambassador for the athleticwear brand) while on a June outing with Davidson.

Depending on the weather, the “thank u, next” singer sometimes throws a pair of leggings or tights into the formula — but not always.

For a Dec. 18 performance on “The Tonight Show Starring Jimmy Fallon,” Grande styled a snowflake-embroidered Talbots sweater with Sergio Rossi boots as she sang her single “Imagine” live for the first time.

And when it comes to her hair, Grande is equally committed to a look. Although she sometimes switches things up, the star can usually be spotted in her signature high ponytail.

Click through the gallery to see more times Ariana Grande stepped out pantless in thigh-high boots.