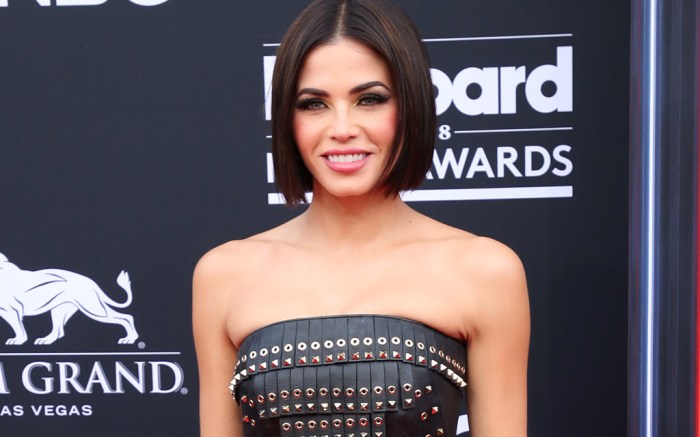 Black never goes out of style.

That’s what Jenna Dewan, Kelly Clarkson and more stars proved when they stepped out on the red carpet today at the 2018 Billboard Music Awards in their head-to-toe stud-embellished black ensembles.

First up was Jenna Dewan, who looked edgier than ever in a strapless Zuhair Murad minidress complete with studs and fringe details. The brunette beauty’s daringly short outfit made enough room for an equally studded pair of ankle-strap sandals.

Another standout appearance came courtesy of Kelly Clarkson. Hosting this year’s BBMAs, the “American Idol” alum wore a seriously stunning gown by Christian Siriano, featuring a dramatic structural neckline, thick patent belt and a high-impact slit that drew the eyes to her strappy embellished heels. Clarkson will also perform at tonight’s awards show along with music icon Janet Jackson, who is slated to receive the prestigious Icon Award.

Keeping in the theme, Chantel Jeffries opted for a skintight crocodile-texture jumpsuit with a lace-up décolletage and empire waist. The 24-year-old DJ-slash-social media starlet also went for stilettos to go with her all-black look.

Click through the gallery to see more celeb arrivals on the red carpet at the 2018 Billboard Music Awards.