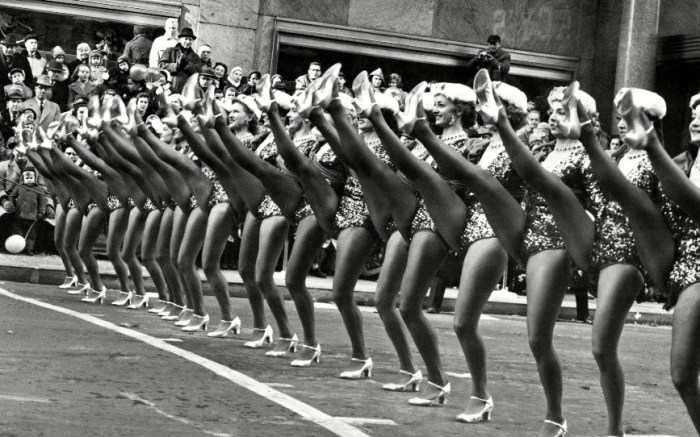 Hold on to your turkey feathers and pilgrim hats, it’s time for this year’s Macy’s Thanksgiving Day Parade. With the heartiest holiday approaching, we are already setting our channels to NBC and our alarms to 9 a.m. in preparation for the three-hour spectacle.

Ninety-four years after the inaugural parade in 1924, this year’s show features performances from Diana Ross, Bazzi, John Legend, Rita Ora and Sugarland, among others. There will be new floats and balloons as well as familiar faces like Charlie Brown and Ronald McDonald.

To get excited for the excitement to come, we looked back at Macy’s Thanksgiving Day parades from years past and found some gems.

Floats were introduced into the parade in 1927, which were not only constructed differently than modern floats, but also took fewer people and less manpower to maneuver.

As time passed and film developed from black and white to color, the floats and scenery of the Macy’s Thanksgiving Day Parade changed as well.

As seen in shots from the 1986 and 1990 parades, we were introduced to classic floats and balloons that still show today (the sizes of which are also comparable to present-day versions).

Now, we’re seeing more characters from pop culture. Balloons for 2018 are expected to include longtime favorites, like Charlie Brown and The Grinch, as well as new additions like Saiyan warrior Goku from the Dragon Ball metaseries.

In 2019, megabrand Coach got involved in the fun, adding a balloon in the shape of its signature green dinosaur.

See how the Macy’s Thanksgiving Day Parade has evolved through the years.