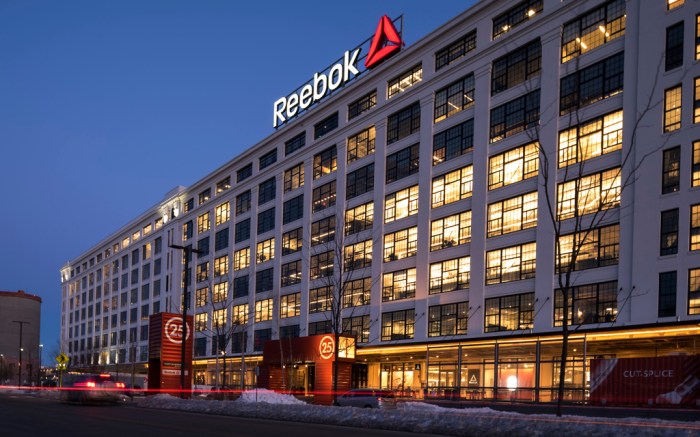 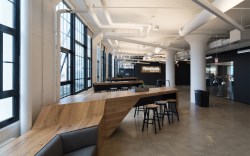 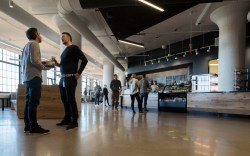 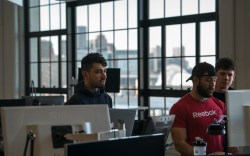 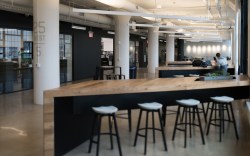 On a snowy morning in Boston Harbor, the view outside the new Reebok headquarters is somewhat obscured by the weather, but what is clearly visible is a gritty industrial scene consisting of warehouses, cranes and a working dry dock where giant ships undergo repairs or refurbishment.

It’s quite a change from the athletic brand’s previous digs, on a traditional corporate campus in suburban Canton, Mass.

The stark differences in environment are entirely intentional, explained Reebok president Matt O’Toole. “When we contemplated moving, we thought, ‘It can’t be a variation on the theme.’ We had this beautiful suburban campus and a lot of great amenities, but we were in a cloistered world,” he said. “So we thought, ‘What would be the opposite of that?'”

He noted that the goal was create a more dynamic environment that would encourage collaboration and innovation. “We came up with a catchphrase of, ‘How do we capture the soul of a startup in a big company?'” said O’Toole. “That led us to this building. They’ve got 120 startups in incubation here, so we’re seeing and talking to so many different people and being inspired by things that normally wouldn’t have a lot to do with our footwear and apparel business. It’s definitely a major change, but the kind of change we were hoping for.”

Other tenants in the building include the Autodesk software firm, Elkus Manfredi Architects the MassChallenge incubator and design consultancy Continuum (which coincidentally collaborated with Reebok on the first Pump sneaker).

In keeping with the vibe of the building, Reebok’s new offices have all the hallmarks of a modern tech firm. The space, which spans five floors and houses more than 700 employees, was designed by Gensler with an open-plan design, so no assigned seats and no offices — not even for the top brass.

O’Toole said the open plan initially caused some trepidation but has turned out to be one of the most beneficial aspects of the move. “In the past, the way the campus was set up, we had four different buildings all connected, and there would be some people you wouldn’t see for a week,” he said. “Now I’m pretty much seeing everybody. [Most of us are] all together on the fifth floor, so a lot of things happen quicker and there are fewer emails, fewer meetings.”

In addition to consolidating office space, Reebok made a retail statement with a massive FitHub on the first floor. The 13,430-square-foot flagship serves as a testing ground for new store concepts and also boasts a permanent sneaker and T-shirt customization service.

And of course there’s the fitness space: a two-story gym that comprises a CrossFit Box, boxing ring, spin room, and yoga and dance studios It hosts 20 classes a day — often by world-class instructors and athletes. The gym is open only to employees, who are enticed with a $75 monthly fee that is reduced with each use.

Other features of the headquarters include a café, photo studio, design labs, wear-testing facilities and a 2,000-square-foot archive that has already become a popular stop for design partners. According to Reebok, Victoria Beckham spent hours there researching her new ’90s-inspired collaboration.

In recent years, Reebok has proved its penchant for innovation with projects like Liquid Factory (the product development initiative that bred its new Liquid Floatride Run sneakers). But this new home highlights another hallmark of the brand that has become increasingly important: community.

O’Toole said that community-building is the “secret sauce” behind its most successful partnerships — namely with CrossFit, UFC, Les Mills and Ragnar — and will continue to be a focus. “What keeps people coming back and working out is that you’re part of a community,” he said. “Once you’ve got some kind of tribe that you’re working out with, it’s a totally different game.”

The executive added that in the coming year, Reebok will continue to look at what’s “new and next” in the fitness arena and is particularly focused on strengthening its U.S. operation. In 2017, the brand’s revenues in North America dipped 15 percent, compared with 24 percent growth in Western Europe and a 25 percent uptick in greater China (on a currency-neutral basis).

“We’ve had three years where we’ve had nice success outside the U.S., growing double-digits every year,” said O’Toole. “So the U.S. now is our prime focus and battleground.”

What Makes a Good CrossFit Shoe, According to Two Reebok Stars