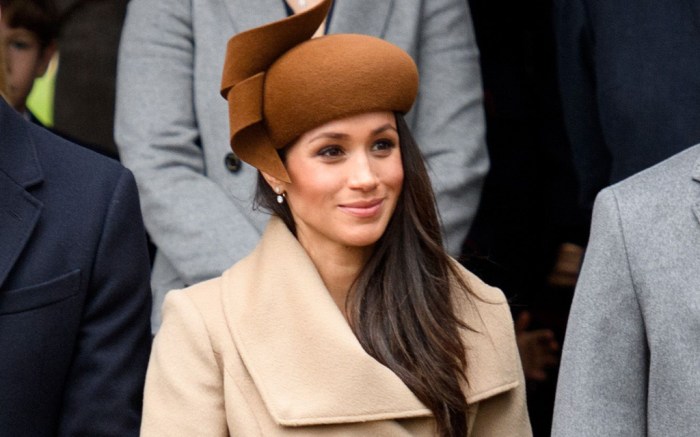 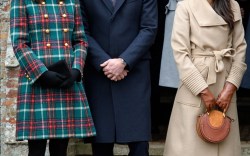 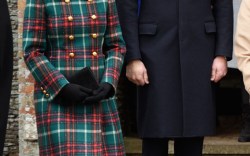 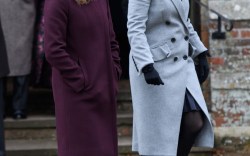 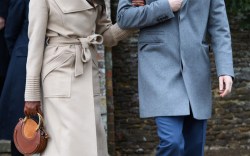 Meghan Markle kicked off her first Christmas with the British royal family in style.

Stepping out yesterday for a morning service at St. Mary Magdalene Church in Sandringham, England, the “Suits” star sported a long Sentaler wrap coat in a chic camel color, which she paired with Stuart Weitzman’s Highland over-the-knee boots in a dark chestnut hue. While the actress has been spotted in many British brands since announcing her engagement to Prince Harry in late November — she chose British designer Kurt Geiger for her first public appearance with the prince — she opted for an American footwear brand for the festive day. She topped off her look with a classic British accessory: a fascinator.

Many of the 36-year-old’s recent looks have long since sold out, and Markle’s Christmas boots are no longer for sale. But a similar style, the Hiline, is available for $798 on Nordstrom’s website. The goatskin leather shoes feature a 4-inch heel and drawstring detail at the top.

Markle’s soon-to-be sister-in-law, Kate Middleton, went for a more festive look. The Duchess of Cambridge — who is pregnant with her third child — sported a red and green plaid Miu Miu coat with black suede pumps by Tod’s. Both Middleton’s coat and heels have already sold out.

Meanwhile, Queen Elizabeth II went for a vibrant look, sporting a bright orange coat and matching hat, which she paired with black pumps.

Click through the gallery to see more photos of the royals’ stylish Christmas morning.

Correction: An earlier version of this article stated the boot style Meghan Markle wore to church is called the Hiline. This name was incorrect. Markle wore the Stuart Weitzman Highland to services.