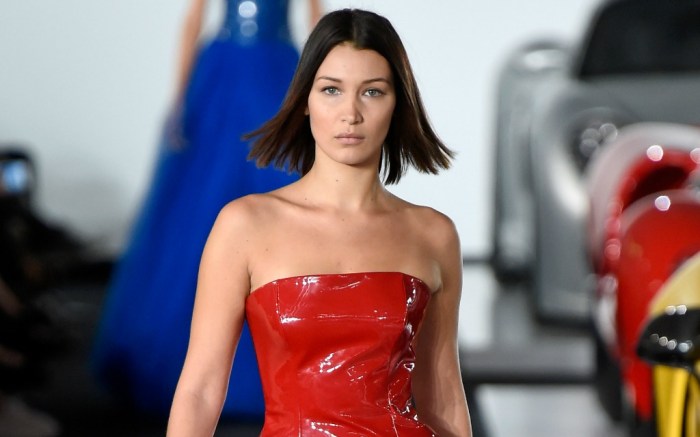 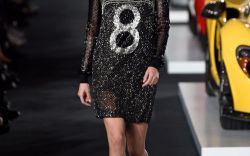 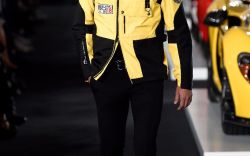 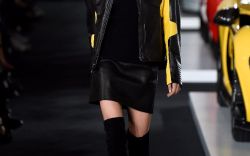 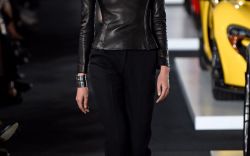 Remarkably, Ralph Lauren’s garage was completely transformed into a grand venue to hold his spring ’18 runway show. The designer’s classic automobile collection boasts over 70 cars valued at $300 million, as reported by Forbes, including limited-edition models and vintage race cars that were driven out one by one and swapped for a long line of black couches and lots of catwalk room. A production team worked its magic, leaving only a select few of the sleek vehicles meticulously lined up throughout the space.

But how would this sporty — edgy, even — setting translate into the designer’s usual polished all-American attire? The opening look — a gray tailored pant and sleeveless top paired with matching pumps — confirmed it would stay the course. After he sent several more impeccable houndstooth looks down paired smartly with pumps and Chelsea boots (for the men), one began to wonder how the sportswear reference made its mark.

But lest the audience get comfortable and miss the point, an ankle-length jeweled choker dress appeared and turned up the volume. Finished with sleek black sandals on the model’s feet, they could have just as believably been walking to drive one of the luxury cars away to the Met Gala as they could have been modeling around them.

Next came pops of yellow in the form of sporty outerwear followed by red splashed in racer stripes and a slinky evening gown. And suddenly, it clicked. The cars aligned in the middle — polished in red, yellow, silver and black — set both the stage and the pragmatic color palette for Lauren’s collection. He stuck to the conventional in footwear, however, staying neutral, save a bright red heel thrown in for good measure.

Click through the gallery to see more looks from Ralph Lauren’s runway.

Nike, Ralph Lauren & Foot Locker Among the ‘Most Powerful’ Brands of 2017