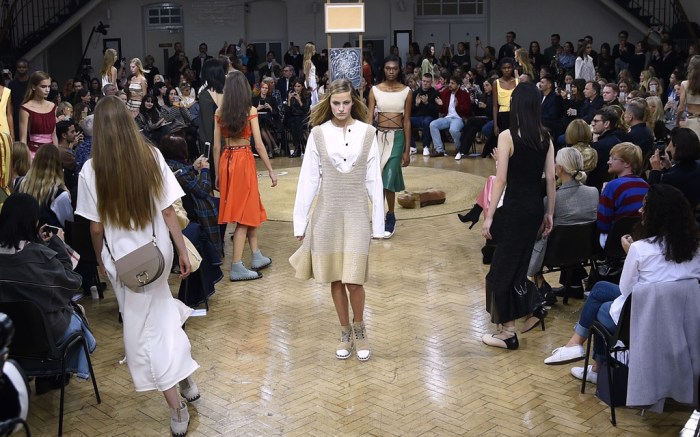 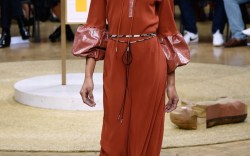 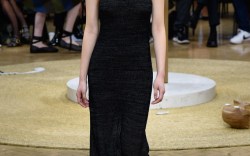 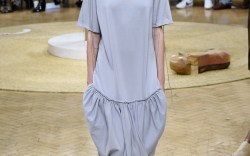 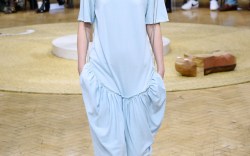 Maybe it was working with utilitarian Japanese label Uniqlo (his collaboration with the brand drops Monday), but there was definitely a new functionality and pared-down silhouette going on with J.W. Anderson’s spring 2018 collection, which was shown today at London Fashion Week.

The footwear follow-up to the glitter festooned Converse kicks he showed in June at Pitti in Florence was an eminently practical espadrille boot. It came in a coated linen/canvas or a suede, rubber dipped toe caps being the J dubs answer to Tom Ford’s Spring 2018 capped toes of New York Fashion Week.

J.W. Anderson’s soles featured a plaited, black-and-white rope weave set atop sturdy rubber under-soles. As for the color palette, that was a Earthy mix of tans, blue-grays and taupes, plus a shade that stopped just short of voguish pink.

But J.W. Anderson being J.W. Anderson, nothing was quite as simple as it might outwardly appear. “With the soles, we took rubber and put it through linen so it was flecked underneath,” he revealed.

Yes a word on that linen. The traditional Irish fabric proved a leitmotif for the entire collection. “There was this idea of using a domestic thing that was humanly grounded, a material we all know in terms of something you see in the kitchen,” he said.

Quite literally as it goes; some of his looks constructed from actual linen tea towel fabric.

Were These the Most Affordable Shoes at New York Fashion Week?