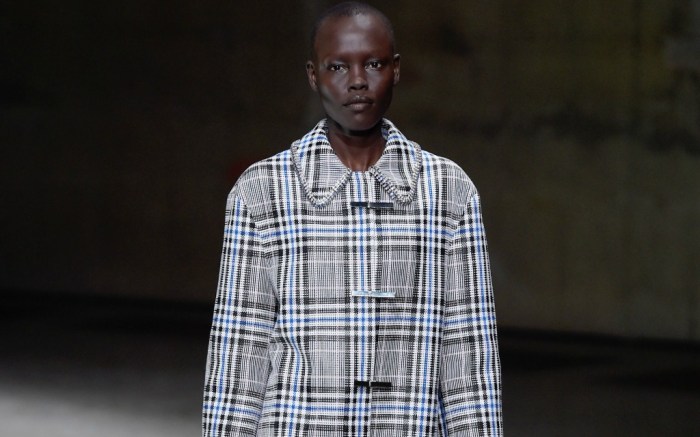 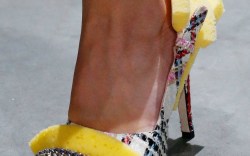 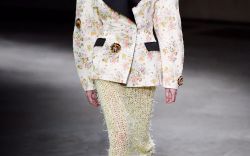 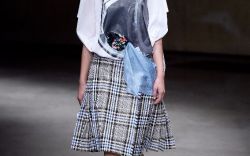 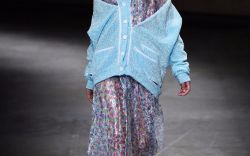 Trust Christopher Kane to bring us his inimitable take on the sparkly-shoe trend. Saint Laurent’s Anthony Vaccarello may have nailed it with his Niki boot last season, but Kane’s Swarovski crystal-encrusted Crocs offered a peculiarly British reposte typical of the Scottish designer.

In fact, the entire collection he showed today at London Fashion Week riffed off Britishness and all its attendant eccentricities.

Aside from the Crocs (Swiftwater styles from the same family, to be exact), which one’s domestic staff might wear to clean the kitchen floor, there were also ankle-strap shoe boots with fringing that resembled the mop he or she would use to do the job.

Kane’s spring 2018 muse was Cynthia Payne (the famous madam known for the suburban sex parties she threw in 1970s and 1980s London) and in a nod to her eyebrow-raising antics. The aforementioned boots were also fashioned in a kinky patent leather fabrication, where the mop fringing was replaced with drops of Swarovski crystal.

“It’s what goes on behind closed doors in those everyday environments: the smell of bleach, Royal Doulton figurines, ‘readers wives’ and a certain kind of British sauciness,” said Kane.

What could be more British than that?

Click through the gallery to see more styles from Christopher Kane’s runway show.

Correction: An earlier version of this article stated that one of the shoe styles in the collection was inspired by an old Burberry print.