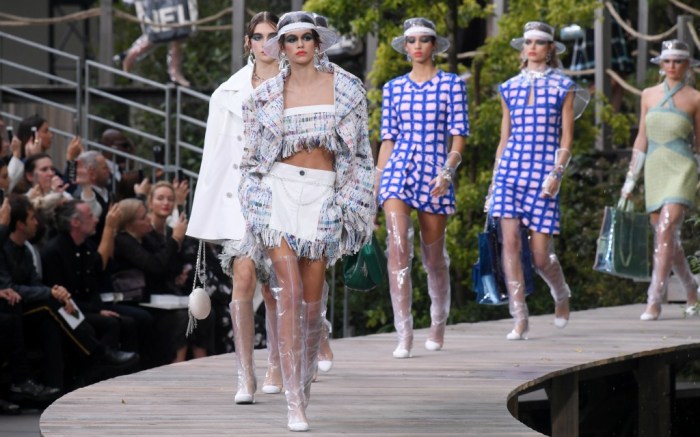 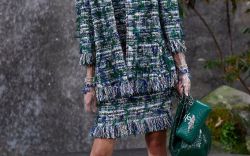 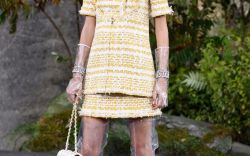 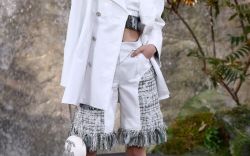 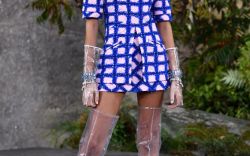 The giant water feature Chanel erected in Paris’s Grand Palais for the brand’s spring 2018 ready-to-wear collection should probably have been a clue. And while Karl Lagerfeld didn’t actually go so far as to make it rain indoors, the cascades of water sluicing down that almighty rockface into the surrounding river were impressive nonetheless. Anything further would have played havoc with one’s blowout.

As soon as the first model sashayed forth from a gap between two boulders wearing a pair of thigh-high plastic booties, the theme of the house’s spring collection became clear.

This trend for transparent plastic or so-called ‘naked’ footwear has been administered this fashion month like a fairly constant intravenous drip but the torrent unleashed today by Chanel footwear designer, Laurence Decade, signals the end of opacity as we know it.

So let us count the ways. All metrological contingencies were well and truly covered from a light shower (midcalf or ankle booties) to a veritable downpour (those thigh high versions). A classic knee high mopped up anything in between.

The classic Chanel capped toe appeared in both black and white and similarly, heel options, both block shaped, came high and low – respectively in monochrome or Plexi.

And while we are now officially at peak plastic, we’ll still be grateful when we’re caught in the rain.

Check out the full Chanel spring 2018 collection in the gallery.