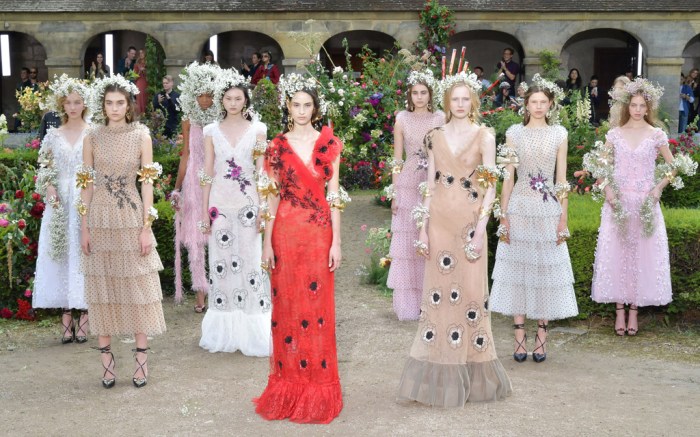 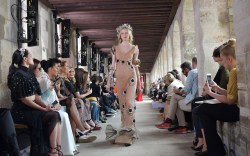 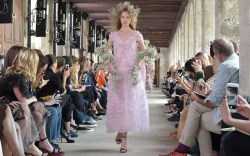 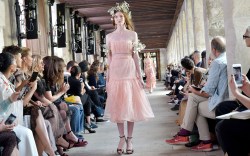 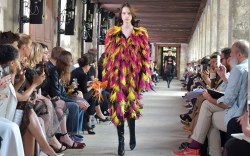 “I beg your pardon, I never promised you a rose garden,” Joe South’s country and Western track goes. Yes, Rodarte’s Mulleavy sisters staged a hoedown amid the cloisters of a 17th-century Parisian abbey today at Haute Couture Fashion Week.

However, while there were plenty of roses growing in the courtyard beyond, it was the tulip that found its way onto the spring 2018 collection’s footwear.

The motif insinuated itself across platform sandals and knee-high Western-style boots alike – its execution, in python skin, giving the demure bloom a much tougher edge.

Similarly, go-faster stripe overlays atop python details on other variants evoked a motocross idea – reinforced by the quilted biker leathers (admittedly, shot with pearl piercings) that interspersed the more ethereal aspects of the ready-to-wear.

“It was everything I’d hoped,” said Laura Mulleavy, standing in the garden amid the model tableaux that completed the show.

“Showing in Couture Week, we wanted to do something different for sure. How could we go to Paris and not try to push ourselves?” she continued of the delicate, couture-esque beading and lacework that was another leitmotif of the collection.

“We wanted to keep the DNA of what we do but still do something that’s romantic and pays reverence to the history of couture and all the houses that show here. We just tried to do it our way.”

Click through the gallery to view more styles from the runway.