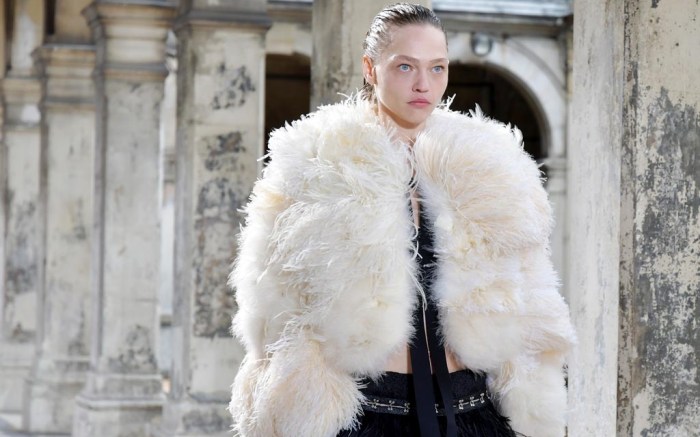 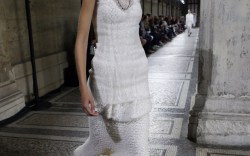 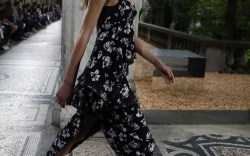 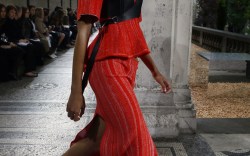 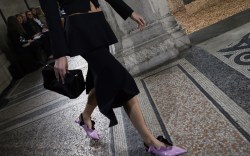 Jack McCollough and Lazaro Hernandez of U.S. label Proenza Schouler showed today at Paris Couture Week as special guests of governing body Federation de la Haute Couture et de la Mode. And while they were presenting their spring ’18 collection, there was a feeling of couture to it. And it wasn’t just the feathers in the clothing.

The kitten heels were so low they were practically flats. Best in show? Pumps that came with pointed toes, contrast-color interiors (black/pink, cream/black and vice versa in both matte and patent leathers) and a deep V of dramatic ruffles.

The duo had been spending time in the City of Light researching couture techniques such as embroidery, featherwork and hand weaving. “It got our minds and energy going to explore that world,” continued Hernandez.

“We did work with Lesage but also with a bunch of smaller independent ateliers,” he said. “There was one with a 400-year-old loom just in somebody’s apartment.”

Other models featured delicate fringed embroidery made from hundreds of tiny metal beads. These were powder-coated to match the satin beneath and jangled like tiny bells with every step.

Elsewhere, patent leathers evoked a fetishistic edge, recalling the corsets of the label’s earliest collections. “We wanted to mix some of that vernacular with the building blocks of couture,” Hernandez continued. “We wanted to break it all up, play with those codes and bring it back together to make it contemporary.”

Click through the gallery to view more styles from the runway.