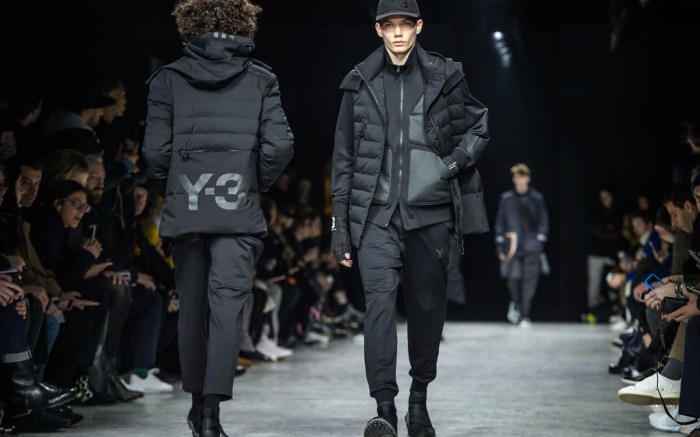 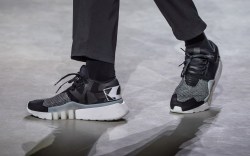 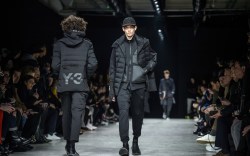 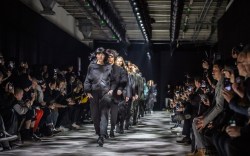 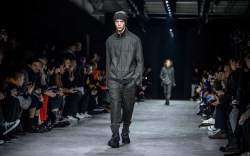 Before the Adidas Y-3 fall 2017 men’s and womenswear show, which took place today at Paris Fashion Week, Yohji Yamamoto was in reflective mood.

The state of planet Earth had been much in his mind, he said, when he was designing the collection, and he set out to explore the relationship between nature and technology.

The line’s signature technical utilitywear came pared back and understated in a subdued palette of black, navy and moss green.

It was enlivened by subtle details such as patched pockets, laser-cut perforations that recalled military mesh and a sculptural 3-D collar treatment that evoked misaligned tectonic plates. Key print was a digital camo that, on closer inspection, proved to be a blown-up image of the Earth as taken from space.

Footwear came similarly pared back and low-key, predominantly black with graphic flashes of the white Y-3 logo to the rear. Of particular note was a chunky high-top model with down-filled spats, knee-high sneaker boots in neoprene that laced up at the back and streamlined scuba-style ankle boots.

The show also premiered the latest edition to the Y-3 footwear family, the Ayero, with a low-cut style and futuristic running-inspired silhouette.