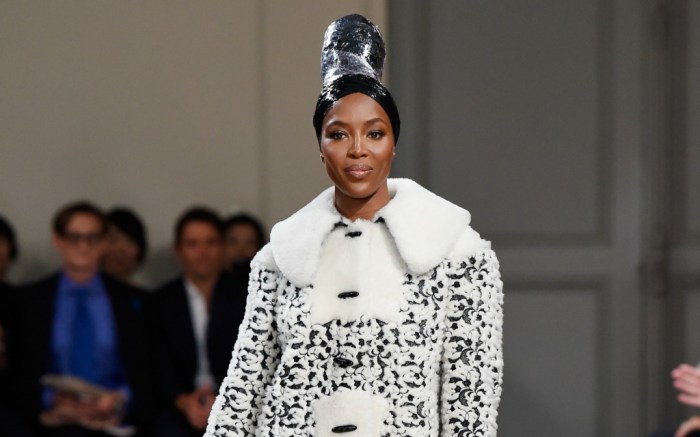 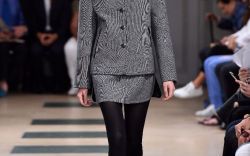 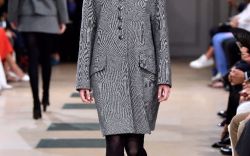 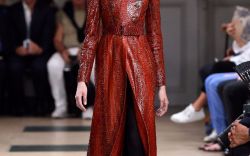 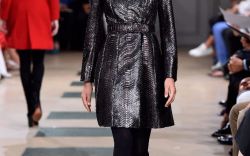 A couture show from Azzedine Alaïa is like a very rare and important metrological phenomenon that occurs only once every few years — in this case six. Avid stargazers will know that Alaïa last presented a couture collection in 2011.

Those privileged enough to be in the correct hemisphere at the appointed hour and with the requisite credentials (Footwear News included) got to experience this blazing trail across the runway firsthand.

Alaïa’s longtime friend, original supermodel Naomi Campbell, both opened (closely followed by Karlie Kloss) and closed the show, which took place today in Paris at the end of fall 2017 couture week. It was difficult to ascertain whether the cheers reverberating around the hall were directed at Campbell or the couture, though one suspects it was a little of both.

There was a ripple of the 1960s to the collection, but in typical Alaïa fashion, the interpretation was thoroughly contemporary.

The footwear riffed spectacularly off the clothes, with both boots and coat dresses coming in a meticulous geometric floral motif recalling an intricately wrought, macro version of the designer’s signature Vienne motif.

Super-simple yet eminently sophisticated black zip-front boots, which formed the mainstay of the footwear, evoked the filigree chainmail of the couture — as did the vertical stud detailing on the ankle boots.

Elsewhere, fiercely woven leopard stretch boots fitted like a second skin. And if they look a touch familiar your eyes are not deceiving you. They were actually a collaboration with Salvatore Ferragamo made especially for Mr Alaïa’s couture show. The boots are a replica of the Italian house’s Indiana style created in 1925. The original also appears in Ferragamo’s current Return to Italy exhibition in Florence and features in the special “Ferragamo Creations” capsule collection released alongside the exhibition.

Said Mr Alaïa in a statement, “I have always been a longtime admirer of Salavatore Ferragamo and his work, constantly ahead of his time and an inspiration to all. I thank the Ferragamo family for this collaboration together.”

All in all, though, the show was a head-to-toe affair, and as for the models’ hair, it came tightly bound into tribal-inflected topknots — ingeniously held in place with plastic wrap. That sight alone was worth a six-year wait.