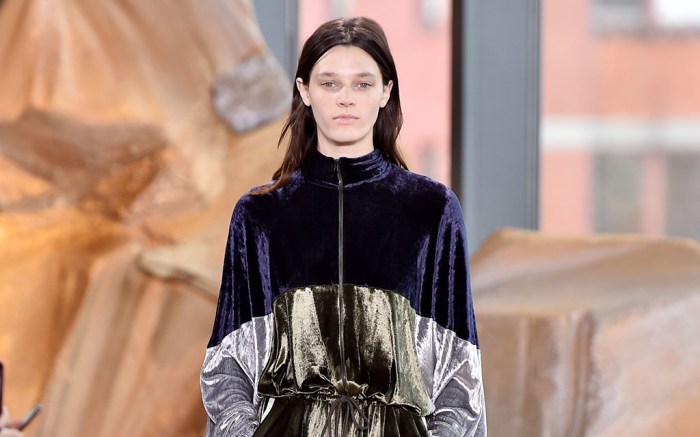 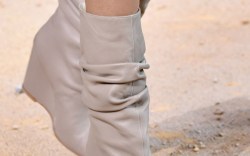 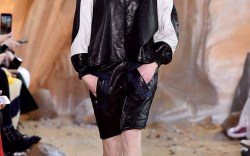 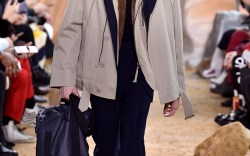 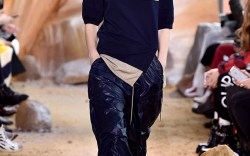 Most know René Lacoste for his career in tennis in the 1920s, after which he founded his eponymous sporting brand, Lacoste. But fewer know the part of Lacoste’s life that was the inspiration for the label’s fall ’17 runway show in New York on Saturday.

After Lacoste’s career in tennis came to an end, he made his way into the aircraft industry and created the company Air Equipement, which contributed to developing the Concorde and Airbus aviation programs. Lacoste creative director Felipe Oliveira Baptista decided to tap into this aspect of Lacoste’s career for the latest collection.

Otherworldly gold rocks were placed throughout the runway, which was also scattered with smaller rocks and pebbles to capture the feeling of being on another planet. Moon boots would be the first silhouette to come to mind for a show with such a theme, but Baptista instead created a boot silhouette that was as futuristic as it was nostalgic — slouchy leather boots called to mind ’90s grunge, but somehow still seemed fresh as ever.

The style was offered up in white, beige, black and even a metallic pink. Baptista also gave the Lacoste classic tennis sneaker a technical upgrade, showing the style in not only signature white but also a burnt orange hue.