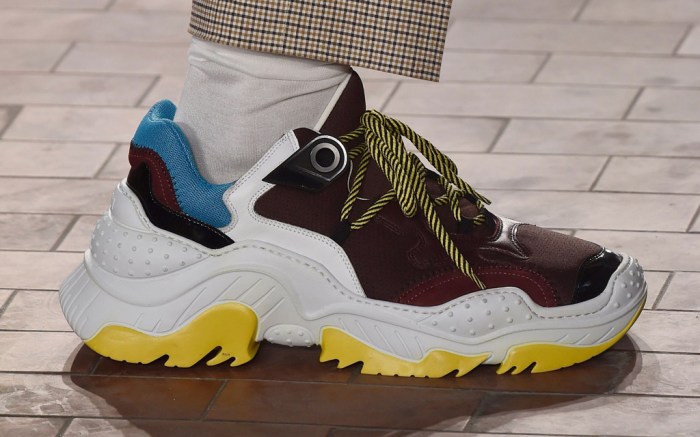 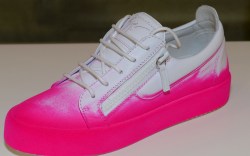 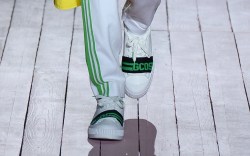 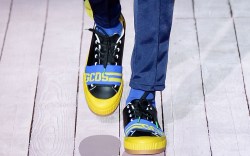 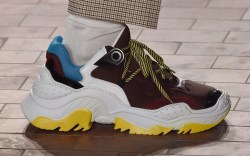 Sneakers: as much an essential element of a man’s wardrobe as once the formal brogue. In fact, Giuseppe Zanotti told Footwear News that his own luxury kicks are designed to be worn with tailoring, while his more traditional footwear styles work best dressed down with denim.

Sneakers came in intricate intrecciato at Jimmy Choo and Santoni, retro style at Tod’s  or in leather painted to resemble distressed fabrics such as denim. Retro runners were also a massive trend at Pitti Uomo.

They underwent a crafty touch at Marni, which showed beaded variants, went back to the future at Prada, where they resembled something out of “Thunderbirds,” while Marcelo Burlon’s new skater kicks had a decidedly ’90s vibe.

The best take by far was Alessandro dell’Aqua’s at No. 21, with fierce, brightly colored irregular sawtooth soles — as if fashioned by a carpenter after one too many gummy bears. Extra points for styling them with floral pajama pants.

Kicks were ubiquitous — except at Diesel Black Gold, that is. While Designer Andres Melbostad may have shod his models in hiking boots, it was the sneaker that inspired his whole collection. “The use of color was borrowed from looking at sneakers and also how they weave the shoe fabrics and how they stitch them,” he said.

Click through the gallery to see more of the best sneakers at Milan Men’s Fashion Week.