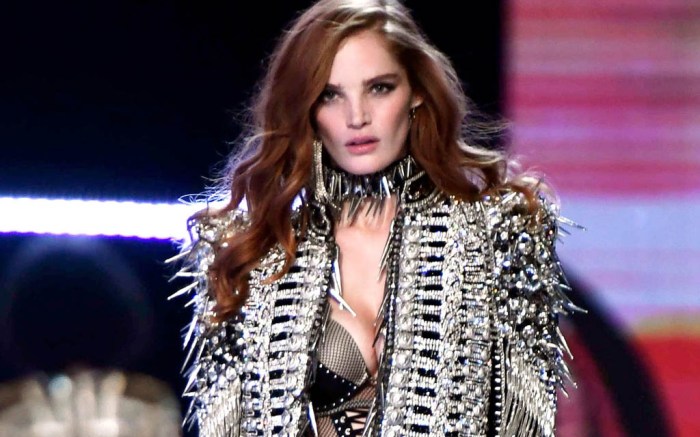 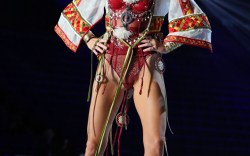 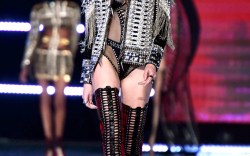 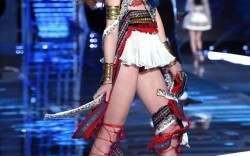 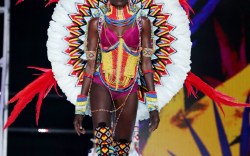 At the 2017 Victoria’s Secret Fashion Show, many familiar faces graced the runway during the pre-recorded show in Shanghai. But among old-timers like Alessandra Ambrosio, Lily Aldridge and Adriana Lima, were new faces, appearing on the runway for the first time.

Below, meet the models who made their Victoria’s Secret Fashion Show debut before it airs Tuesday at 10 p.m. ET on CBS.

Nadine Leopold is a 23-year-old Austrian model. Leopold has appeared on the cover of numerous magazines, including Glamour (France) and Elle (Russia), and she is rumored to have dated Harry Styles, who performed at this year’s Victoria’s Secret Fashion Show.

Alexina Graham is the first redhead to ever appear in the Victoria’s Secret Fashion Show. The 26-year-old Brit is a brand ambassador for L’Oréal Paris and has starred in campaigns for Burberry, Sportmax and Brooks Brothers.

Grace Bol is a Sudanese model who tore up the runways in the spring 2018 fashion shows, walking for Balmain, Lanvin and Burberry, among others. The 27-year-old first signed a modeling contract in 2010, appearing on the runway next year for Givenchy, Vivienne Westwood and Maison Martin Marigela.

Gizele Oliveira got most of her attention at this year’s show when she helped veteran Ming Xi after a slip on the runway. Oliveira’s runway walk was sweetened by the fact that her best friend, Bruna Lirio, also booked this year’s show.

Estelle Chen is a French model of Chinese descent who rose to the world of high fashion via the Elite Model Look Competition. The 19-year-old says she feels a close connection to China, despite being raised in France, which made the show’s location especially exciting for her.

Vanessa Moody has walked the runway for top brands such as Versace, Chanel and Stella McCartney. In addition to her work on the runway, Moody has also appeared in numerous campaigns, including a star turn in Michael Kors’ spring 2016 campaign.

Norwegian model Frida Aasen was first discovered at a mall. In years since, the 22-year-old has walked the runway for DKNY, Salvatore Ferragamo and Prada, among others.

Australian model Victoria Lee was one of just two Aussies to walk the Victoria’s Secret runway this year, with the other being veteran Kelly Gale. Lee landed a major brand ambassadorship for David Jones, just days after her Victoria’s Secret Fashion Show debut.

Like Chen, Amilna Estevao was first discovered in the Elite Model Look contest, which she entered in her home country of Angola. In her short career, the 18-year-old has already been featured in Paper Magazine and appeared on the cover of the New York Times‘ T Magazine.

Cape Verdean Alecia Morais has walked for top labels such as Dries Van Noten, 3.1 Phillip Lim and Louis Vuitton. The model has appeared in numerous magazines, including Elle and Seventeen.

Roosmarijn de Kok comes from the Netherlands. The 19-year-old model will appear in the annual Sports Illustrated swimsuit edition this year.

Samile Bermannelli’s first season came in September 2016, when she walked the runways of Kenzo, Valentino and Alberta Ferretti for a strong debut. Now, the Brazilian model has lived out a moment she’s long dreamed of by walking the Victoria’s Secret catwalk.

Last but not least is Aiden Curtiss, the daughter of famed model Katoucha “The Peul Princess” Niane. The model has walked the runway for top labels including Bottega Veneta, Fendi and Versace in her career so far.

Click the gallery to see all of the looks worn by Victoria’s Secret newcomers.