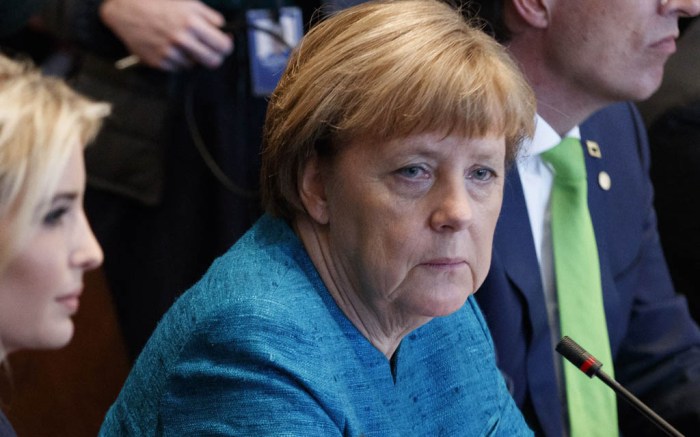 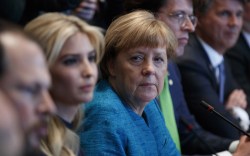 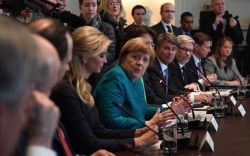 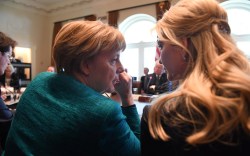 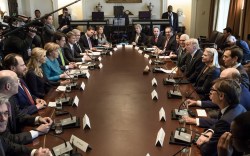 Netizens have reacted en masse over a photo of German Chancellor Angela Merkel shooting a quizzical look at Ivanka Trump.

The striking moment was captured on Friday in the White House as shoe designer Ivanka spoke during President Donald Trump’s roundtable on workforce development. It was President Trump’s first meeting with Germany’s leader, and other guests of the summit included German and American business executives.

Ah, it must be "Bring Your Daughter to Work Day" here in the USA today, ja?
Why else would Ivanka Trump be here?
Angela Merkel pic.twitter.com/tIABoROxr9

Some snarky observers on social media questioned what Merkel had on her mind when she flashed side-eye toward Ivanka.

Ivanka praised her father for his “commitment to creating millions of jobs” and championed private investment. “Ingenuity, creativity often comes from the determination of the private sector,” she said.

#Germany's Chancellor Angela #Merkel was sat next to @IvankaTrump during WH official talks. What is Ivanka's job in the #US administration? pic.twitter.com/tAFMYjiFlx

Filling in the blanks to describe Merkel’s expression, a Twitter user captioned the moment: “Merkel: Why is a Handbag Designer at this Meeting?”

Another user created a thought bubble over Merkel’s head with the caption: “Nobody told me it was bring your daughter to work day.”

Many other comments echoed similar criticism of Ivanka’s participation in political matters, but the entrepreneur will likely have greater visibility throughout her father’s administration.

No reason why @IvankaTrump should sit with Angela Merkel. She is the @MaryamNSharif of USA. Nepotism by @realDonaldTrump promoting daughter. pic.twitter.com/6LOwMkERUM

According to the Associated Press, it was Ivanka who recruited the American executives at the meeting, and she concluded the discussion by saying that they will form a task force and provide a report in three months on how the countries can work together. Ivanka held a similar meeting with Canadian Prime Minister Justin Trudeau in February.

In an ABC “20/20” interview last year, the businesswoman announced she was stepping away from her shoe and lifestyle empire for the White House, and called it an “emotional” decision.

Ivanka said in November that she doesn’t plan on participating in politics in an “administrative” capacity; instead, she said she wishes to serve as a political advocate and has stated that women’s rights are among her interests. The Ivanka Trump company followed up with a statement clarifying the division between her business and personal pursuits.

The entrepreneur relocated to Washington, D.C., with her husband, Jared Kushner, who serves as the senior adviser to her father. Ivanka has also participated in talks with tech titans on innovation and job growth, and has held court with other political figures.