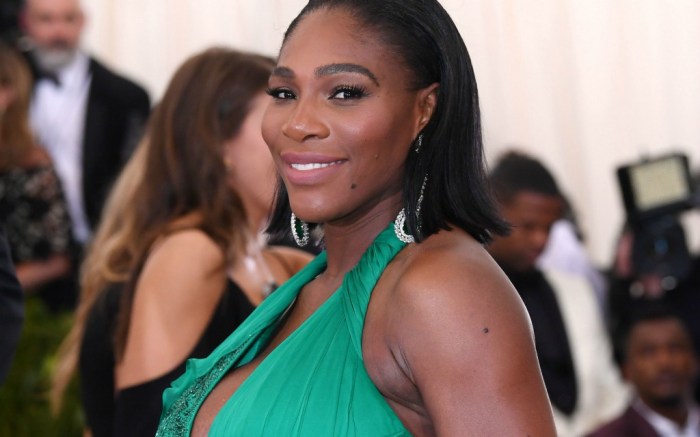 Barely two weeks after announcing her pregnancy on Snapchat, Nike athlete Serena Williams showed off her 22-week baby bump on the red, er, yellow and blue carpet at the Metropolitan Museum of Art’s Costume Institute Ball. The 23-time Grand Slam tennis champion revealed at a TED Talk that she accidentally shared the news via social media.

“I’ve been just saving [the photo], but you know how social media is — you press the wrong button and … 30 minutes later, I missed four calls, and I’m like, ‘That’s weird.’ But it was a good moment. I was only going to wait five or six more days [to tell people],” she said to moderator Gayle King last week.

But tonight, it was all about the dress and her first major maternity style moment. The 35-year-old wore an emerald green Versace gown and emerald-drop earrings, paired with a sparkly, spiked bracelet.

Williams, who attended the benefit with fiancé Alexis Ohanian, stopped to pose for pictures in the curve-hugging floor-length gown.