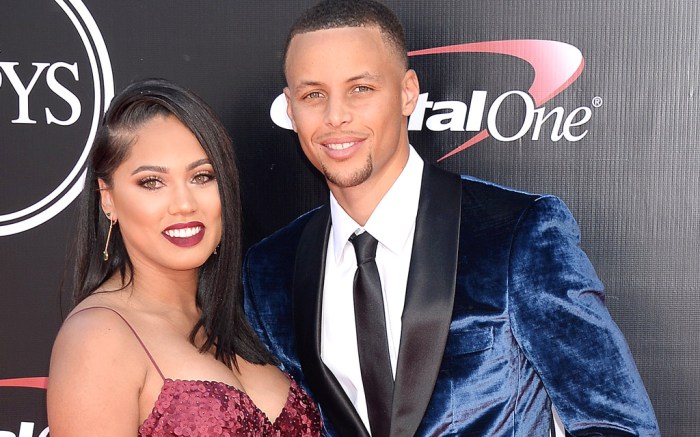 This year’s ESPYs are tonight, and while Steph Curry isn’t nominated for any individual awards, his team, the Golden State Warriors, could win Best Team — and his teammate, Kevin Durant, is nominated for Best NBA Player.

Although Ayesha won’t watch her husband take home a trophy, she’ll have an opportunity to show off her red carpet style, which has run the gamut over the past few years.

In September 2015, she wore a black lace jumpsuit for the NBA 2K16 red carpet event, making a statement with a pair of strappy black heels.

For the 2016 Kids’ Choice Sports Awards, Ayesha went for a bohemian vibe on the red carpet, wearing a blue and teal patterned dress, which she paired with beige sandals and loose waves for a beachy look.

For recent date nights with her husband in Los Angeles — and for the parade following the Warriors’ championship victory — Ayesha has gravitated toward trendy pieces, wearing thigh-high boots, T-shirt dresses and cut-off denim shorts.

For those hoping to catch a rare glimpse of Ayesha’s red carpet style tonight, free streaming of the ESPYs red carpet is available online.

Click through the gallery to see more of Ayesha’s style moments.