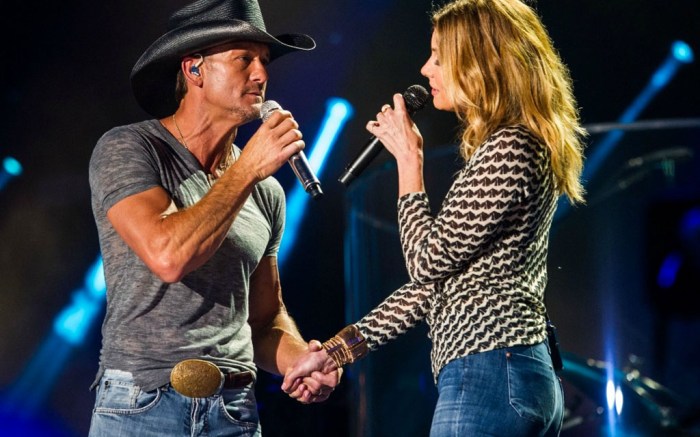 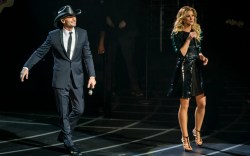 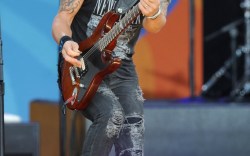 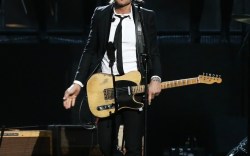 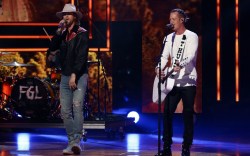 There’s a number of incredible country artists set to take the stage tonight at the ACM Awards (Academy of Country Music), airing live from Las Vegas at 8 p.m. ET on CBS.

Miranda Lambert will perform an acoustic version of her song “Tin Man” off her album “The Weight of These Wings,” which is nominated for Album of the Year tonight.

Lately, the star’s stage style has included head-to-toe black looks. At the CMA Awards back in November, Lambert donned a black top and black jeans for the occasion, where she performed her song “Vice.”

The blonde beauty sports another all-black get up Austin, Texas, where she took the stage at the iHeartCountry Festival last April.

Carrie Underwood, who is up against Miranda Lambert tonight for Female Vocalist of the Year, will be performing alongside Keith Urban, their hit single, “The Fighter.” Back in November of last year, the singer donned a black and gold embellished dress paired with fringe embellished black pumps with gold accents for a concert.

Carrie Underwood went for another dress for her performance at the CMA Awards. This time around, the country crooner paired her dress with leather tie and and fingerless gloves for the occasion.

Sam Hunt will be performing his song “Body Like a Back Road” at the ACM Awards tonight. The singer is known to wear white tees and super tight pants when he takes the stage. Like here, where Hunt completed the look with high-top sneakers at the 2016 iHeartRadio Music Festival.

Hunt is also known to wear caps when performing. Here, the singer chose a red hat, which he wore with another white T-shirt, distressed denim shorts and a pair of blue and white sneakers at the Windy City LakeShake Music Festival in Chicago.

Dierks Bentley is another jeans and T-shirt kind of guy. The singer will be teaming up with Cole Swindell tonight to perform their song “Flatliner” at the ACM Awards. Bentley sported a gray-green T-shirt with black jeans and black lace-up boots to take the stage at the “Today” show back in June.