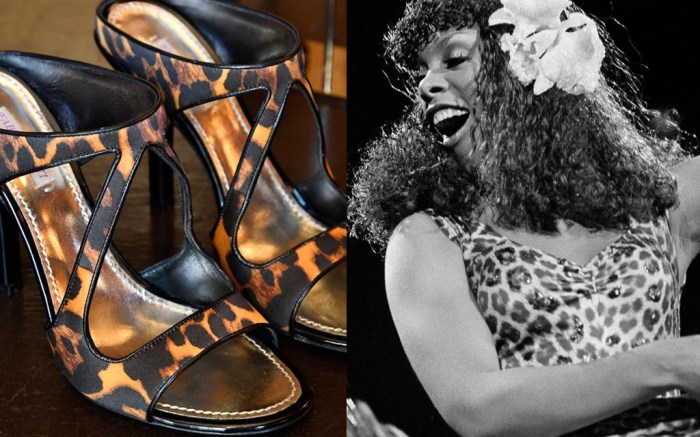 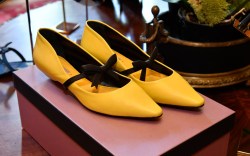 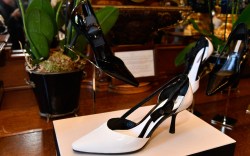 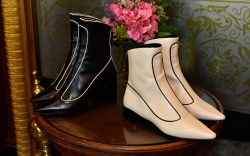 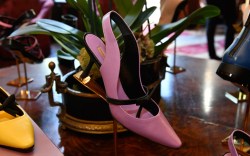 Fabrizio Viti’s resort ’18 muse was Donna Summer. The designer has been aching to base a collection on the late queen of disco since he started his line last year, but this season the stars aligned.

Highlights of the collection, entitled “Back in Love Again” and presented today in Paris, are sandals and pumps in animal print and disco metallics and a lot of sass. The leopard print riffs off a dress worn by the diva when she was performing her 1979 hit “Hot Stuff” on stage in Los Angeles.

Viti’s version comes in a synthetic-mix satin that perfectly evokes the spirit of those heady days of disco. Summer was the idol of Viti’s youth. He started out as a groupie; “I was her stalker for 20 years,” he joked, “and then she gave up and we became friends.”

This season, Viti, who is also the women’s shoe designer at Louis Vuitton, further explored his signature bow motif, creating matte rubber versions in a suitably disco palette of lime green and orange. They adorn the leopard print pumps for an overall effect that feels fresh and super-now.

Elsewhere said bows come in classic black to embellish Viti’s suede and nappa leather stories. After all, another key Viti signature is his love of contrasting textures. This is also apparent in his pairing of patent uppers with gommato leather heels — all wearable heights, of course, ranging from 2 to 10 centimeters.

“I don’t make shoes for men,” he says. “I make them for the girls that have to wear them.”