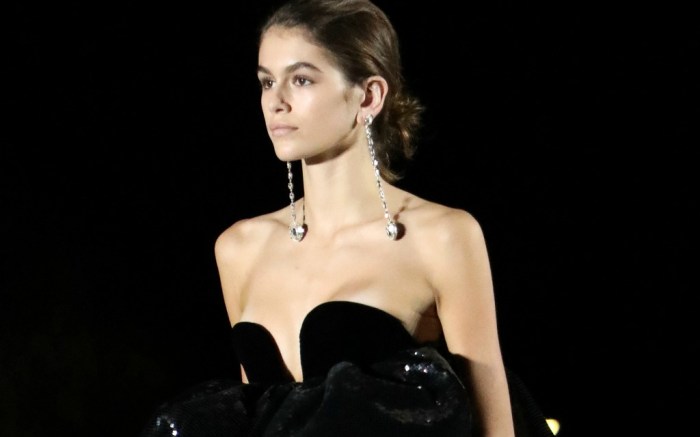 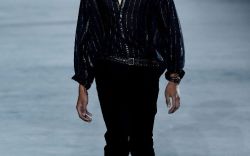 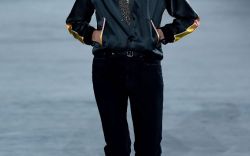 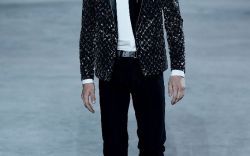 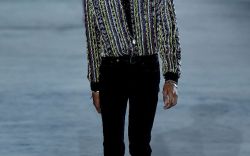 When you make a boot with so many crystals that it renders its wearer a human disco ball worthy of Studio 54, when Rihanna wears it straight off the runway, when it generates more column inches that an a-list celebrity, when, despite its $10,000 price point it amasses a stonking waitlist, and when, according to Net-a-Porter retail fashion director Lisa Aiken, it is the most Instagrammed boot of Fashion Month, it prompts one question: Where do we go from here?

Today at the Saint Laurent show in Paris, Anthony Vaccarello’s response began as measured and tempered, one suspects, by the death of the house’s co-founder, Pierre Bergé, this month.

However, the delicate feathered sandals that appeared in the opening looks soon segued into dramatic thigh-high feathered boots – part Big Bird, part “Black Swan” — their overblown volumes reflected in a series of breathtaking couture pieces that came later in the show.

There were also more commercial pointed pumps with embellished toe-caps and heels to match, while elsewhere, the Niki slouch boot made a reprise for sprint, minus the rhinestones this time, but when you have a hit that big, it pays to keep it in the mix.

So while there were no crystal boots, there was still plenty of sparkle. Besides, when you have the Eiffel Tower as the backdrop to your venue, who needs all those rhinestones, anyway?