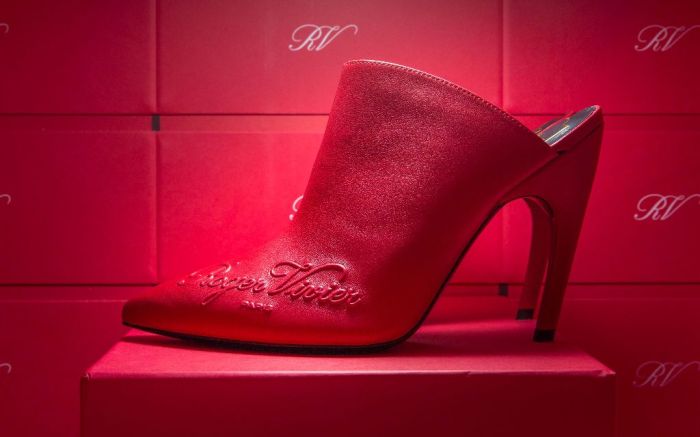 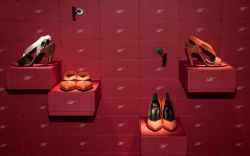 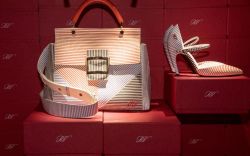 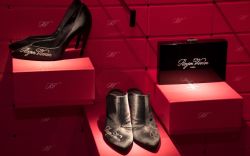 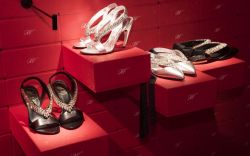 “Hi Roger, how are you? What do you think the new Choc?”

Roger Vivier creative director Bruno Frisoni stood inside the French label’s presentation space, which happened to be a giant version of Vivier’s signature red shoebox. Frisoni pretended to call the house’s late founder, Roger Vivier, to talk about the updated version of the iconic Choc curved heel, which is the centerpiece of the spring ’18 collection.

Each season, Frisoni honors Vivier’s rich history — in both obvious and subtle ways. This time around, the famous founder was very present. Vivier’s voice was heard on the background of the musical soundtrack that played as visitors walked through the space: “A dress is carried by the woman, but the shoe carries a woman,” Vivier said.

Frisoni definitely agrees — and this season he made a huge statement with the geometrical Choc heel. “I introduced the Choc when I first started here, and this is a new take,” Frisoni said.

The heel was incorporated into all of the signature pieces of the collection — mules, sandals and boots in tangerine reds, emerald greens, lavenders and pinks. Playful flower appliques, studs and elegant crystals were among the key embellishments this season.

Frisoni also offered up a new V shape on uppers, which stands for Vivier, of course. “Like the Jaguar E series, this is the Roger Vivier V series,” Frisoni joked. As part of a collection of playful striped shirting styles, an RV moniker represented a chic monogram on the shoes. In the La’Bel Vivier looks, the logo is refashioned in the shape of a 17th century picture frame. And the Roger Vivier signature in script writing adorns other key styles.

All of the new product was shown in front, or on top of, Roger Vivier shoeboxes within the larger space. In fact, there were 10,500 boxes in total.

“It’s like ‘Alice in Wonderland.’ You open a door and you find another door, and another,” said Frisoni.

For more of Roger Vivier’s spring ’18 collection, check out the gallery.