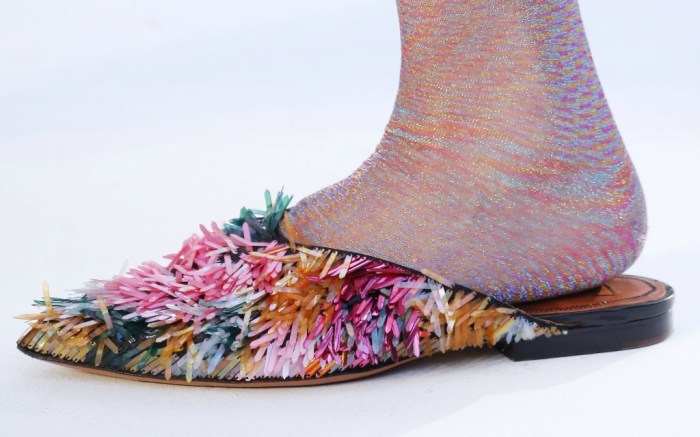 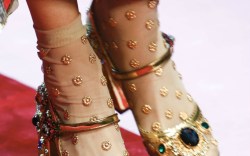 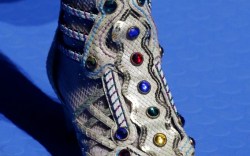 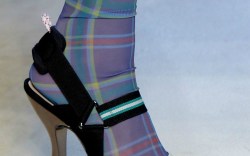 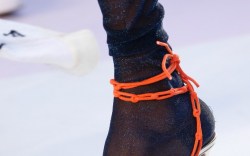 Milan Fashion Week bows to several trends seen among the presentations for spring 2018. Here, we take a look at some of the key styles.

Sock it to ‘Em

In Milan, legwear was a story in its own right from Gucci’s rhinestone-spangled ice-skater chic to Fendi’s sheer tartan stockings. Elsewhere, Gianvito Rossi blurred the line between shoe and sock with lace boots that appeared so delicate, they should really come in a pack of three.

Green and yellow packed a mean punch at Attico, Gianvito Rossi and Giuseppe Zanotti and primaries were out in force at Prada while Vionnet’s multiband ankle straps offered up all the colors of the rainbow in one go.

While pearl embellishments proliferated in London, Milan got its rocks on with gusto and the glitz on show at Paula Cademartori and Giannico – asymmetric swirls and crystalline lips, respectively – was positively blinding. There were also Bollywood gems at Gucci and Dolce and jeweled heels at Jimmy Choo.

From Missoni’s tinsel toes to Roberto Cavalli’s baboosh slippers and jeweled mesh versions at Attico; when the trend for party flats makes it to Milan, you know it’s a keeper.

The Mary Jane has shed its ingénue image and adopted an embellished ankle strap, pointed toe and “I mean business” attitude. Bottega Veneta’s versions with their colored gems and grommets were the sophisticate choice, while Fendi’s seatbelt straps are a safe bet for the fashion-forward.

Marco di Vincenzo’s colored Plexi heels lit up the runway and we loved Gianvito Rossi’s deco versions, too. The latter also showed new variations on the naked trend he spearheaded – not least some racy latex looks, while Casadei encased its signature Blade heel in Plexi like an objet d’art.