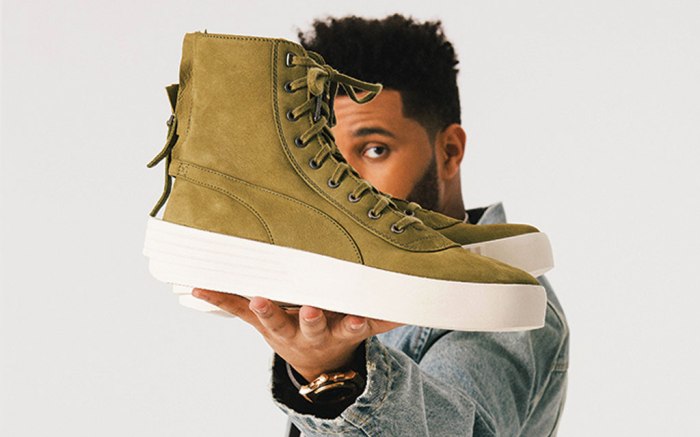 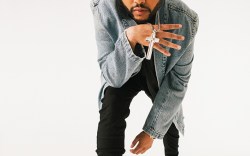 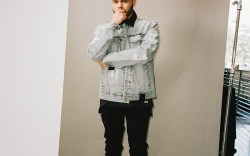 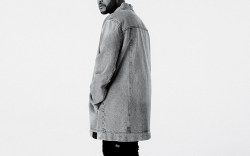 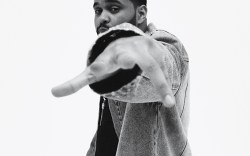 “I like those candid vibes. I like that side profile, too,” a focused Abel “The Weeknd” Tesfaye told photographer Derek Wood while looking through his shots at Los Angeles’ famed Milk Studios. “But that should be the cover right there.”

Wood and Tesfaye had never met, but their creative chemistry was palpable from the beginning and resulted in captivating shots from a rapid-fire session.

As an on-set observer, I could easily see that The Weeknd is careful with how his image is portrayed, and ensures its execution is largely in his control.

Though Wood snapped hundreds of images during an exclusive two-hour shoot with Footwear News, the look Tesfaye was particularly fond of made the final cut to lead this issue.

During the session, The Weeknd — who had recently wrapped Phase One of his “Starboy: Legend of the Fall” tour — forfeited the overwhelming footwear and apparel selection that’s synonymous with celebrity features.

Instead, Tesfaye opted for a slimmer range: two sparsely filled rolling racks featuring Puma x XO apparel, and two pairs of sneakers, the all-white and olive iterations of his signature model, the Parallel.

His line with Puma boasts streetwear staples — T-shirts, denim jackets and pants — to pair with the Parallel, a stripped-down sneaker with casual appeal that borders on the height of a boot. “His sense of style is intriguing because he’s developed a refined uniform that consistently feels current. He brings a diŠfferent aesthetic, a little more refined and simple,” said Chris Pepe, senior buyer of men’s footwear at Barneys. “The consistency makes him a standout in the realm of entertainers.”

This image, which mirrors today’s hottest men’s fashion, distinguishes him as one of Puma’s most important ambassadors.

“He’s stylish, but he’s also approachable. He’s relatable and has a look that can be worn by a lot of young men,” explained Adam Petrick, global director of brand and marketing at Puma. “It’s not over-the-top or unattainable.”

Puma added The Weeknd to its celeb ambassador team, which includes superstar songstress and the brand’s creative director Rihanna, in September 2016 — introducing the partnership to the world with images of the singer in the brand’s popular Ignite Evoknit style.

After campaigns featuring Tesfaye in the Ignite Limitless Netfit and Tsugi Netfit styles, the brand will finally release his own anticipated Parallel model on Aug. 24 at top-tier retailers, including Kith, The Webster and Barneys.

“The Weeknd has shown us that he’s knowledgeable about and interested in fashion,” said Laure Heriard Dubreuil, founder and president of The Webster. “This collaboration feels like a true partnership between the artist and the brand.”

The first colorway of the sneaker is a pristine, all-white iteration priced at $220 — and retailers are applauding the brand’s approach to product diversity.

“Puma has been putting out some unique styles lately, so adding cleaner elements to the collection helps Puma appeal to another customer,” said Pepe. “Our customers are always looking for the newest sneaker styles, so this collaboration with The Weeknd is definitely something that will be on their radar.”

Tesfaye is one of Puma’s freshest faces to endorse product and has bypassed those with a longer tenure with the brand to get a signature sneaker. “He had a strong idea about what footwear should look like if it was put through The Weeknd’s filter,” Petrick said. “That’s not to say all of our partners wouldn’t have that vision, but in the case of The Weeknd, it made sense to bring something new to the marketplace that reflected his personal style.”

The Parallel is the first shoe from his partnership with Puma to come to fruition, and Petrick confirmed more Tesfaye-inspired drops are coming. “We’ll be releasing collections this fall, and we have exciting product coming this spring,” Petrick said. “And we’re optimistic that this is going to be a long-term partnership and that we’ll have the opportunity to evolve with The Weeknd as he creatively evolves.”

With the Parallel release approaching, the stylish music icon opened up about the creation of the sneaker, his style evolution and whom he wants to see in his kicks.

The launch date for the Parallel is fast approaching. How do you feel?

“It’s finally happening. We’ve been working with Puma for almost a year, and everyone is more than ready to get the sneakers out. I was nervous at first, but when I finally got to hold the product, I immediately fell in love. I think people will like it.”

What aspects of the design were you most focused on, and what did you learn?

“I was involved in almost every aspect, but I was most focused on the silhouette. With XO and Puma, we really collaborated and worked on making the best product possible.”

As you build your business, is accessibility or exclusivity more important to you? Is there another celeb business you want to emulate?

“Exclusivity is always important to me, and I will definitely do limited pieces and shoes with Puma. But for this first one, I’d love it to go to the masses. I haven’t really been using anyone else as a reference for this side of the business, but I am definitely investing as much of my time into this as possible.”

Whom would you most like to see wear the shoe and why?

How does your signature shoe fit in with your persona?

“I feel like the Puma shoe is a part of the ‘Starboy’ world. It’s the shoe Starboy would wear. We actually revealed we were first working with Puma in the ‘Starboy’ video. We’re already evolving in the next phase of our collaboration, so I’m gonna keep that a secret.”

You’re constantly reinventing yourself as a musician. How has that affected your personal style?

“Usually when I reinvent myself, I like to get rid of everything in my closet and replace it with how I’m feeling during that album phase. It never changes drastically, though; rather just very slightly over time.”

When you’re choosing onstage kicks, what do you look for?

“It depends. The longer the set, the more comfortable and light it has to feel. If it’s short, it doesn’t matter how it feels, so I can wear anything, sometimes even boots.”

Embracing the spotlight, at times, has been challenging for you. Have you overcome that?

“I think with time I’ve learned to be a little more comfortable. My fans show me that I can feel confidence. They give so much love in person and at my shows. I still get shy, though; it’s something I can’t seem to quite shake off‰.”

As you reflect on your debut mixtape, ‘House of Balloons,’ what experiences during that era helped shape you?

“I spent a lot of time alone. My life is very di‰fferent now than it was back then. It’s definitely something I would like to feel for a bit again. I’m continuously around people. I might want to shut the world out for a bit.”

How do you respond to criticism?

“I used to pay attention all the time; it would take over my life. Any kind of criticism would ruin my day, but through the years, I’ve learned to accept it and know the di‰fference between constructive criticism, hate and just plain trolling.”

How has your Ethiopian heritage impacted you as a person and musician?

“It’s my culture. [The way] my mother raised me makes me who I am right now. Ethiopians are kind, caring and selfless people. One day, it will help me raise a family. Musically, it’s very important to me. The soul in my singing and the melancholy in my chords are very Ethiopian-inspired. It’s something that will always be embedded in me.”

The Weeknd Chows Down on Ramen in Latest Puma Campaign

Selena Gomez and The Weeknd Spotted in Sneakers in Argentina