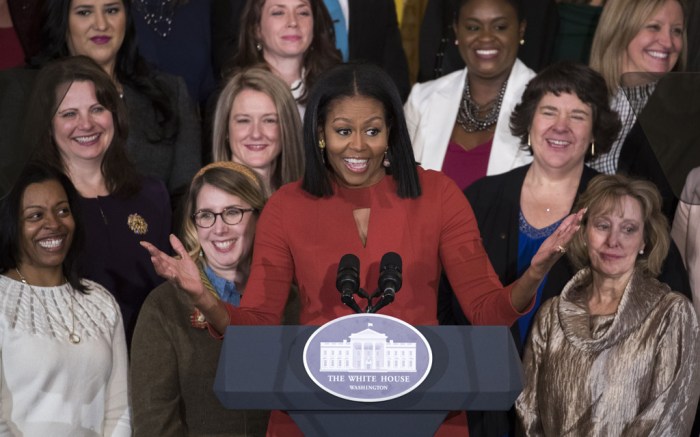 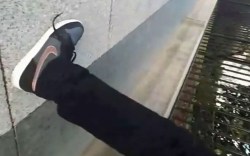 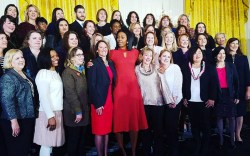 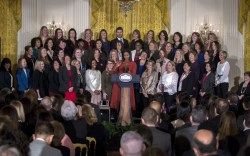 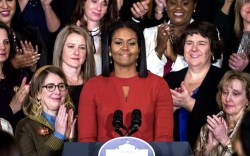 The stars aligned for Michelle Obama, who delivered her final speech today as first lady. Many of her famous fans, including Usher, Kelly Rowland and Allison Williams, turned out to celebrate her legacy as an advocate for education, health and more during her eight years alongside President Barack Obama.

“Being your first lady has been the greatest honor of my life, and I hope I’ve made you proud,” she told guests in the East Room of the White House during the 2017 School Counselor of the Year ceremony.

To no one’s surprise, the first lady cut a chic figure and stuck to one of her favorite designers. She had on a Narciso Rodriguez pre-fall ’17 crepe dress that she teamed with a pair of pointed-toe pumps.

“So much admiration for our First Lady, @MichelleObama,” Rodriguez shared on Instagram. “It has been my greatest honor to dress her over these past eight years.”

Naturally, attendees donned their finest, too. And for “Saturday Night Live” alum Jay Pharoah, who parodied President Obama on the sketch-comedy series, it was an occasion for Air Jordan kicks.

“My selection of shoe for this place is game changing 😂😂😂😂#historic #Whitehouse #jordans#reachhigher #bettermakeroom,” the comedian shared in an Instagram video.

Here are some of their remarks shared on social media.

Allison Williams: “As an education fanatic/supporter/advocate, there have been few people more inspiring to me than the indomitable and incomparable@michelleobama. Thank you for#BetterMakeRoom and #ReachHigherand all of your hard work on behalf of American students — but especially those who most need an advocate. It was an honor to be present for your final remarks today, and it’s been an honor to support your work. Let’s keep at it, and I will continue to help in any way I can. And, at last, thank you for being an example of humanity to us all.”

Connie Britton: “Not a dry eye in the house today as First Lady Michelle Obama delivered the last remarks of her tenure in the White House. She spoke of the power of Hope and how she wants every boy and girl and family, regardless of religion, race or background to know that they belong, that they have value and they can lift themselves up, and lift up their communities.”

La La Anthony: “A moment I will never forget. Sitting in the front row today at the White House watching in awe as our FLOTUS delivered her final speech ❤🙏🏽#myhero.”