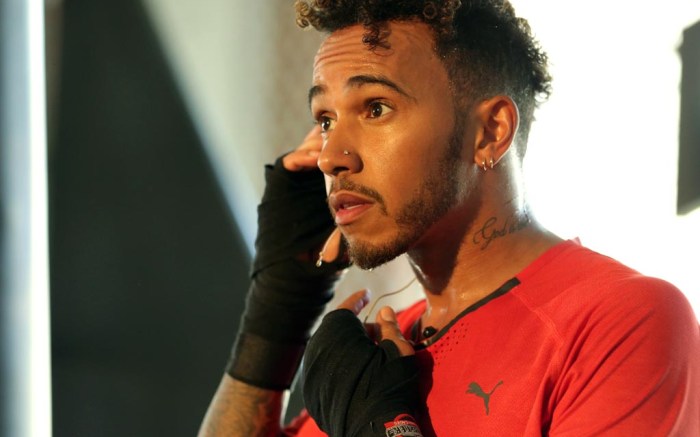 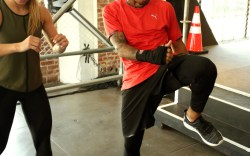 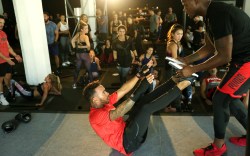 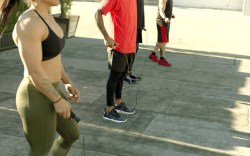 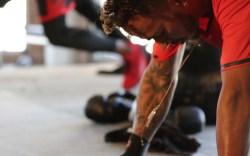 Lewis Hamilton is Puma’s newest Team Faster ambassador. The FIA Formula One world champion held a fitness session in the label’s gear on Tuesday in Los Angeles to celebrate his new role.

“It’s such a cool brand because it’s got a mixture of athletics and urban life-style that makes it easy to wear today,” explained the 32-year-old British race-car driver, who has been wearing head-to-toe Puma behind the wheel. “It’s not just the shoes, but they do the suit and the underwear,” Hamilton said, adding that he consults with the company on minimizing the amount his competition outfit weighs.

“My race suit, I have to get that as light as possible; and my boots are the lightest — as light as socks,” he said.

Throughout the year, Hamilton has to maintain his weight under 150 pounds for the sport. “I’m basically like a jockey — I can’t be big and bulky,” he explained.

Here, Hamilton dishes on style and his sneaker fantasy.

Footwear News: Who’s your biggest style influence?
Lewis Hamilton: “Pharrell [Williams] — he’s a friend and one of the most iconic musicians around. He thinks of things that you think will never work. Remember that big hat?”

FN: Are you a sneakerhead?
LH: “I have more than 200 sneakers in my apartment, and the second bedroom you can’t get into because the closet is full and the floor is covered in shoes. It sounds ridiculous because you can only wear one pair a day, but I live for fresh kicks.”

FN: What does your dream shoe look like?
LH: “I hope in this new partner-ship, at some stage, I get my own shoe. I like colors [and] quite bold looks. I like a lot of comfort, so my sole would have a lot of stability. I like the XO boot The Weeknd has done, but I’d make it much sportier.”

See behind the scenes images from Lewis Hamilton’s workout session.