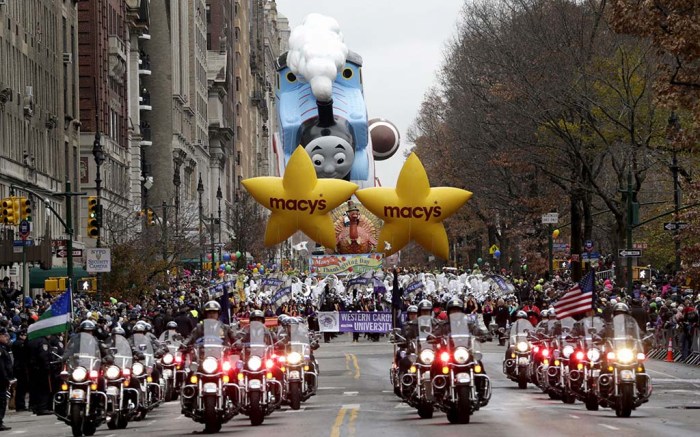 Since its 1924 inception, the Macy’s Thanksgiving Day Parade has seen many changes — but it has remained a Thanksgiving staple for decades.

In the parade’s earliest years, live animals (camels, tigers, goats, elephants, etc.) paraded down the streets in lieu of the whimsical balloons that give the parade its character today. The practice was abandoned in 1927.

From 1929 through 1931, the balloons were intentionally released upon the parade’s conclusion in New York’s Herald Square. Those who caught the balloons would find postcards inside, which could be redeemed for gift cards worth up to $50.

While the scavenger hunt was removed, the parade has seen other additions. The Radio City Rockettes first performed in 1957, and they have appeared at each parade since.

One thing that hasn’t changed since the parade’s inception is its finale: Every year, Santa Claus has arrived at the end to mark the start of the holiday season. The one exception is 1933, a year in which Santa led the parade.

Newcomer balloons to this year’s parade include Olaf from Disney’s “Frozen,” Dr. Seuss’ The Grinch, PAW Patrol, the Aflac Duck Balloonicle and Jett from “Super Wings.” Fan favorites, including Charlie Brown, Pikachu and SpongeBob SquarePants, will return for this year’s event.

Click through the gallery to see more images of the parade over the years.

These Stores Will Be Open (or Closed) on Thanksgiving Day