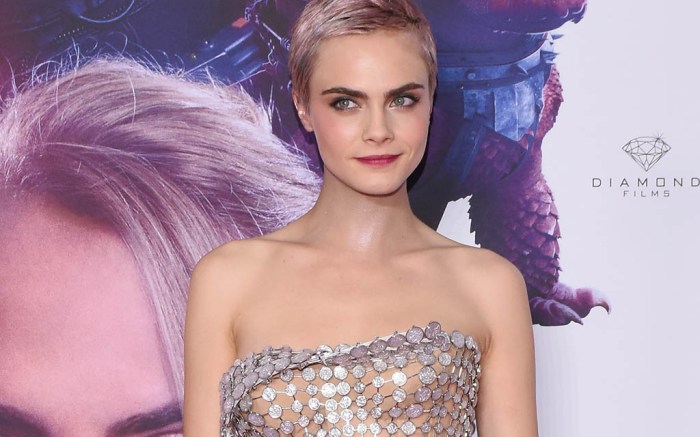 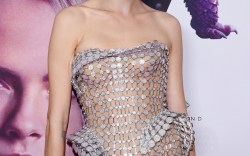 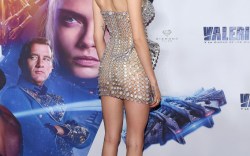 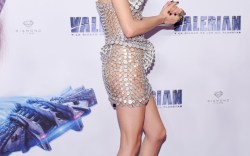 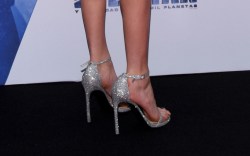 Cara Delevingne took to the red carpet in two of her most risqué looks yet on Wednesday for the “Valerian and the City of a Thousand Planets” premiere in Mexico City.

The model-actress sizzled in a strapless, nude-illusion dress by Versace that featured architectural detail around the bodice and waist — all covered with mother-of-pearl paillettes. The sex appeal continued down to her shoes, where she stepped out in a sparkling silver sandal with a soaring stiletto heel.

Later, she stomped out in a sheer minidress by Maison Margiela with thigh-high Christian Louboutin boots.

Delevingne’s been making the promotional rounds as she promotes “Valerian,” but this nude-illusion style is a departure for the actress, who has been favoring pantsuits with plunging necklines and feminine detailing for the majority of her appearances thus far.

The sheer dress is right on-trend: celebrities including Charlize Theron and Kirsten Dunst have worn similar styles this summer. Adding thigh-highs to the see-through minidress makes it a bit more edgy — and with Delevingne’s bleached pixie cut and tattoos, the edgy touch works well.

Rihanna, who co-stars with Delevingne in the film, has received more attention for her outfits at “Valerian” events, including a cleavage-baring red dress and a heavily fringed Barbie-pink ensemble.

But Delevingne’s style has been attention-worthy in its own right: She’s worn a very low-cut, silver Alexandre Vauthier gown, a heavily embellished Burberry pantsuit with matching sandals and a menswear-inspired Alexander Wang plaid outfit.

Click through the gallery to see all of Cara Delevigne’s sizzling “Valerian” red carpet premiere styles.